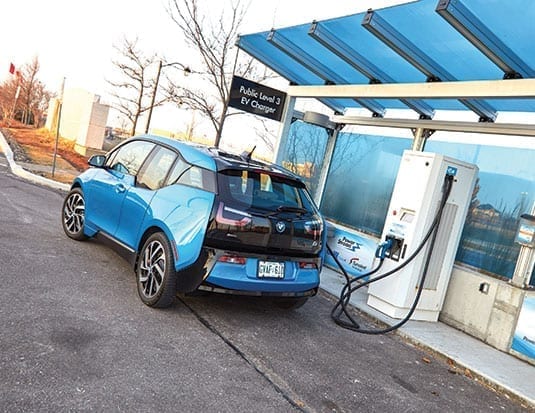 Before investing in EVs for your fleet, make sure you understand that not all electric vehicles can be “refuelled” in the same way.

Electric vehicles face a major impediment to widespread adoption because of how they’re “fuelled.” While gas stations are so plentiful that there are sometimes two or three on a corner in busy areas, public vehicle charging stations are still very rare.

There are three levels of charging, and knowing how they work and how long they take to recharge can help you to decide if an electric vehicle will be right for your fleet.

The most basic is Level 1, which is essentially plugging it into any standard 120-volt wall outlet. This will take the longest—depending on the vehicle and its battery, a full charge from depletion could take anywhere from some eight hours, to almost a full day. Naturally, that won’t be an option for you, other than in unusual circumstances where you don’t have anything else.

However, it may be an option if you’re looking at plug-in hybrids (PHEVs). These vehicles can be plugged in to provide a limited amount of battery-only driving. When the stored charge runs out, they revert to regular hybrid operation, running for as long as they have fuel in the tank. PHEVs can be recharged more quickly on a higher-level charging system, in around one to four hours, but a regular 120-volt charge may be enough if the vehicle is going to sit overnight before it’s used.

The next stage, Level 2, recharges at 240 volts. At this level, a depleted battery can be fully charged in about four to six hours. The majority of public charging stations are Level 2, and most automakers offer them with their electric vehicles, as a separate purchase, to hardwire in at home or business. Depending on the province and conditions, fleets may be eligible for government rebates on the purchase and installation of a charging station.

While the first and second levels are AC, Level 3 charging is DC. These chargers can bring a depleted battery up to about 85 percent of charge in around half an hour.

Level 3 chargers are very rare, mostly because public stations can be as much as $100,000 to install. The lack of fast-charging infrastructure is a major setback with consumers, who worry about driving beyond the vehicle’s range without an easy and quick way to recharge.

That isn’t the only issue. Level 3 charging is harder on the battery than Level 2, although most manufacturers say it isn’t enough to affect the vehicle’s performance over its expected lifetime. Not all vehicles come with a Level 3 charging port, or it may be an expensive option.

Not all the same

Another problem, and one that has automakers tearing out their hair, is standardization. As yet, there are no universal standards for charging and, so far, not even any idea of who might provide any. A vehicle with a Level 3 charging port still won’t necessarily be able to plug into some Level 3 chargers. Tesla, for example, has 951 “Supercharger” stations across North America, but they’re proprietary and only work with Tesla vehicles.