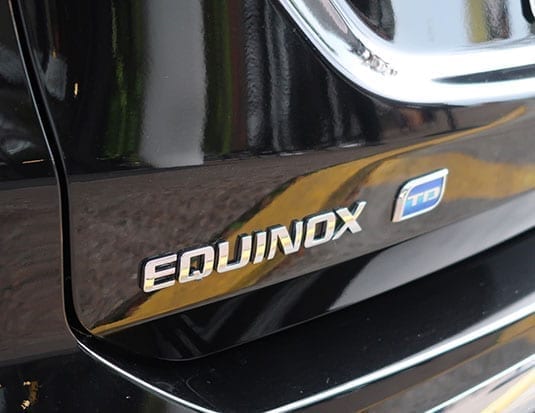 TORONTO – Electric powertrains and turbocharged gas engines are becoming popular offerings with automakers, but there’s still a market for diesel.

That’s especially true for high-mileage fleets, along with consumers who spend most of their time on the highway. General Motors recently announced that its new 1.6-litre turbodiesel is now offered in the 2018 Chevrolet Equinox, along with sibling GMC Terrain, as well as the Chevrolet Cruze, where it replaces the previous 2.0-litre diesel.

The 1.6-litre makes 137 horsepower and 240 lb-ft of torque. In the Equinox, it achieves a published combined city/highway rating of 7.4 L/100 km, versus 9.7 for that model’s available 2.0-litre gasoline turbo engine (which has a premium fuel recommendation), and 8.9 for the turbocharged 1.5-litre gas engine (all figures for all-wheel drive).

At a presentation in Toronto, Michael Siegrist, regional chief engineer for the 1.6-litre, called the new engine the Flüsterdiesel, or “whisper” diesel, for its quiet operation. “Peak torque comes at 1,000 rpm,” he said. “Potential customers still consider diesels noisy, but this one is 65 per cent quieter than the diesel used in the Jaguar F-Pace.”

The all-new 1.6-litre is a clean-sheet design, engineered by GM in Italy and built in Hungary. Its diesel exhaust fluid (DEF) system was engineered at the automaker’s technical centre in Oshawa, Ontario. Its ceramic glow plugs meet starting requirements of -25°C, and there’s an oil pan heater to handle temperatures down to -35°C. Siegrist said that its 2,000-bar solenoid fuel injection system is superior to piezo injectors, and by providing up to ten injections per ignition cycle, the injectors reduce noise by tapering the torque curve.

The engine includes start-stop technology, and can run on B20 biodiesel. It includes a variable-geometry turbocharger that reacts to performance requirements, and its intake manifold features two ports, one that stays open continually and the other equipped with a butterfly valve to continually change the intake, creating a variable swirl for improved combustion.

To further reduce noise, the timing system is on the rear of the engine, where the sprockets and chain are covered by the bell housing. A variable-displacement oil pump and a solenoid-controlled oil gallery improve fuel efficiency. DEF is added beside the fuel filler, and Siegrist estimates 8,000 to 9,600 kilometres between refills. The tank is heated to prevent the fluid from jelling.

The 1.6-litre joins GM’s other diesel offerings, the 2.8-litre four-cylinder used in the midsize Chevrolet Colorado and GMC Canyon, and the 6.6-litre V8 in the heavy-duty Silverado and Sierra pickup trucks, making up to 910 lb-ft of torque. The company recently switched diesels in its Chevrolet Express and GMC Savana vans, replacing the 6.6-litre V8 with the 2.8-litre I4. This was due to customer demand: the vans are primarily used for deliveries, rather than for towing, and the larger diesel was more than most people required.

At the presentation, GM wouldn’t divulge future plans for its full-size, light-duty pickup trucks. Ram has offered a diesel in its 1500 for some time, and Ford is adding a diesel to its F-150, but no plans have been announced for the Silverado/Sierra half-ton models.

General Motors said that it sold about 143,000 diesel-equipped vehicles in North America in 2016, and that in the U.S., diesel sales overall were up 16.5 per cent year-over-year in the first half of 2017.