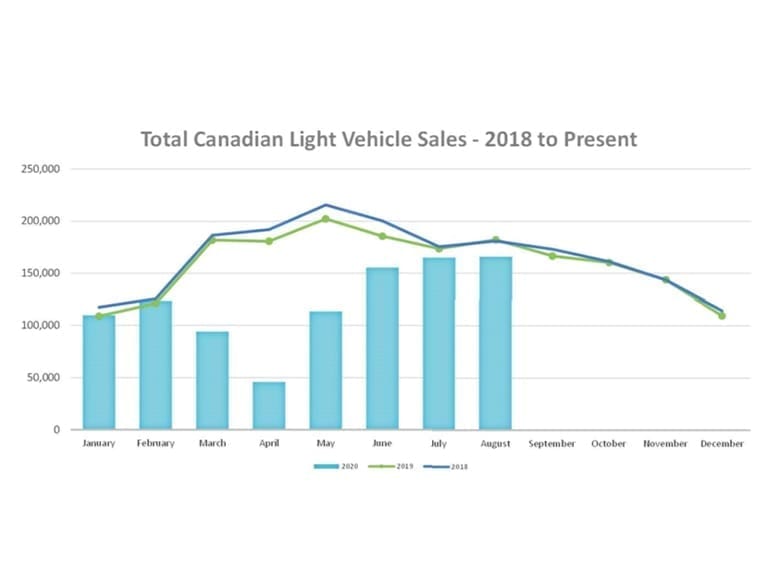 In separate reports, Desrosiers Automotive Consultants (DAC) and ScotiaBank estimated that in August, Canadian light vehicle sales were down 8.9% year-over-year (nsa) with year-to-date sales now at -27%. This is not too far from the 4.9% change seen in July.

According to ScotiaBank Economics, Canadian auto sales’ rebound softened modestly in August with a deceleration of -7% m/m (sa) relative to last month’s exceptional rebound. The seasonally adjusted sales rate for the month stood at 1.73M units—still healthy for this early stage of recovery—but lower than the exceptional 1.86M (saar) units in July (but recall both months are still estimates as automakers have shifted to quarterly reporting).

DAC’s report states that sales reached an estimated total of 165,837 units sold in August 2020, down from the estimated 182,040 units sold in the same month of 2019. August sales were within approximately 900 units of July’s total.

“After 5 months of violent swings in the market – first precipitous declines and then remarkable recoveries – we finally have a measure of stability” commented Andrew King, Managing Partner of DAC. “The consolidation of the market is definitely a positive, although underlaying dynamics remain volatile and we do expect further twists and turns in the coming months.”

DAC states that short to medium-term sales outlook is still very much a matter of debate. As the government starts to scale back its support of the economy, the implications for the automotive market remain unclear. Moreover, the shifting public health and regulatory environment is still unstable and will continue to dictate market and economic performance in the months ahead.

ScotiaBank maintains their sales forecast outlook at 1.6 mn units for 2020 with some further upside from these new policy supports along with the stronger economic recovery profile, but still notes considerable downside risks on the horizon, particularly south of the border.

The Conference Board reported a modest pull-back in consumer sentiment in August, but the trend strength in the auto sales rebound remains. Given fleet sales are still depressed, the retail sales rebound is even stronger, showing signs of not only pent-up demand, but also pandemic- motivated purchases.

The trend jibes with a stronger-than-anticipated GDP hand- off from the second-quarter, along with continued job growth recoveries across the country, while retail spending had already surpassed pre-pandemic levels in June.

Though retail growth in July likely moderated, generous government transfers continue to provide a lift. New income supports recently announced—that will enable households to earn up to $38k per year before claw-backs start—will likely further underpin the recovery in auto sales into the Fall.

In the same report by Scotia Bank, U.S. auto sales posted a fourth month of recovery with August purchases increasing by 5% m/m (sa) at an annualized pace of 15.2 mn units. On a year- over-year basis, sales were down -19%.

Activity was not sufficiently strong enough to nudge year-to-date sales which still stand at -22%. As COVID-19 cases continue to mount across the States and additional stimulus talks stalled, consumer auto purchase intentions deteriorated in August, nearly halving the gains accrued over the past three months, according to the Conference Board.

But broader economic indicators are still driving actual purchases: weekly jobless claims—while volatile— have been trending modestly downward over the month of August, and U.S. housing starts and sales for July surged above consensus suggesting American consumers are still active.

For both Canadian and U.S. markets, inventory remains another key challenge for dealers. Though North American auto production achieved positive year-over-year growth in July according to Ward’s Automotive, it still trails the rebound in demand, particularly for sought-after models, with tight inventory expected to persist through the Fall.

Scotia Bank forecasts that U.S. auto sales is 14M units on the basis of early rebound activity, but clearly with substantial downside risks related to the course of the pandemic, the ability of Congress to pass additional stimulus, and election uncertainty.