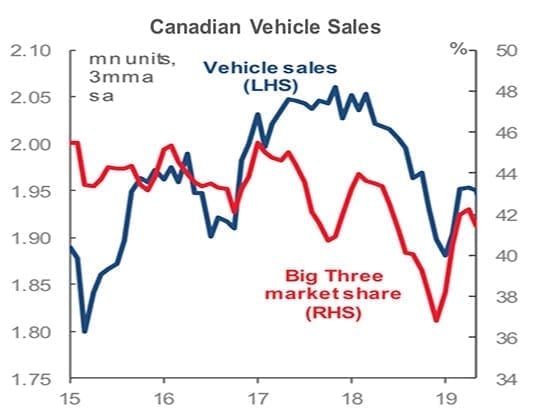 Canadian auto sales dip in June by 7.2% y/y, representing a decline of 2.3 m/m on a seasonally adjusted basis.

Canadian auto sales are slowing down for the sixteenth consecutive month of year-over-year declines, with the year-to-date (ytd) decline now standing at 4.9% (nsa). Despite supportive conditions in May and June, like good weather, unexpected tax refunds, and strong job growth, the sales rate dropped to 1.88 mn saar units for June with a ytd sales rate of 1.93 mn saar units. However, Scotiabank Economics predicts that stronger economic growth during the second half of the year may reinforce modest sales growth for the remainder of the year, even if the annual sales of 1.94 mn units are below the number of units sold in 2018 and 2017.

Global Automakers of Canada, however, show that despite the continuous drop in auto sales overall, the first half of the sales are actually robust.

“Canadian auto sales continue to be fairly robust amidst pretty stable and positive consumer confidence ratings,” said David Adams, President, Global Automakers of Canada. “Looking at the glass half full, if sales for the remainder of 2019 track along current levels, we will still have one of the better sales years ever in Canada,” added Adams.

GAC shows that June sales were down by an estimate of 6.7%, contributing to a first-half sales moderation of 5.5.% compared to 2018. Truck sales comprised 73% of the market in June and the first half of the year.

These figures by GAC are simply estimates and will be updated once General Motors quarterly report is made available by DesRosiers Automotive Consultants.