Decline in Global Auto Sales Continue in May 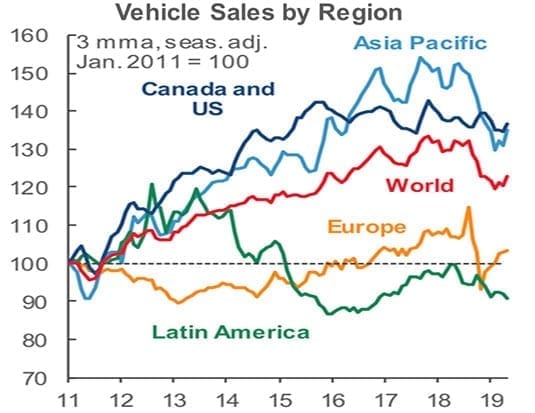 Global auto sales fell by 6.7% y/y in May for the ninth consecutive month of year-on-year declines; Canada sees a modest increase on a seasonally-adjusted basis.

The global downturn in auto sales was reaffirmed with sales down by 7.0% on a year-to-date basis. Due to a synchronized global economic slowdown, almost all major regions will show a decline in total sales, with the forecast for 2019 now sitting at 77.0 mn units, compared to the 79.0 mn and 78.6 mn units in 2017 and 2018 respectively.

On- and off- again trade tensions are taking a toll on consumer confidence and are slowing down growth prospects, which is expected to last for the rest of the year. There is continued uncertainties around consumer wealth effects, interest rate channels, tariff impacts on prices, and exchange rate effects.

The global selling rate improved in May by 1.8% on a month-over-month, seasonally adjusted basis, with a slightly stronger US sales largely offset by a continued slide in Chinese purchases.

May’s global sales by country on a y/y basis show:

Canadian Auto Sales increased marginally in May by 0.1% on a seasonally-adjusted basis, but a decline on a y/y basis has continued with sales dropping 5.6% for the fifteenth consecutive month. May does have the makings for a decent sales month with warm weather, tax refunds, and a reprieve from the USMCA trade uncertainty.

Nevertheless, retail sales declined by about 4.5%. Fleet sales are picking up, which has reversed the fleet sales dropping by about 10% in May y/y. The decline in retail sales is expected to continue.