Blast From the Past

13 February 2019
Jil McIntosh
Autosphere » Dealerships » Blast From the Past 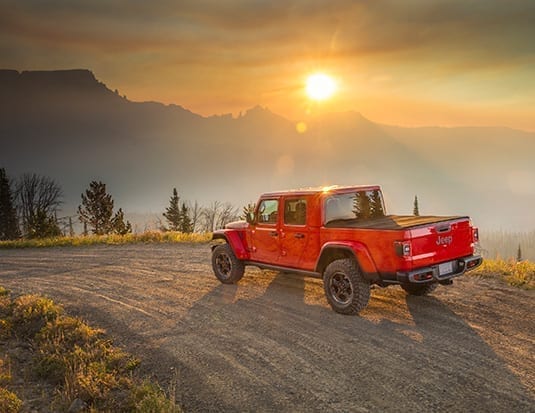 Customers have demanded it for years, and the company is finally delivering: this year, Jeep will return a pickup truck to its lineup. As did a model in years past, the new truck will bear the name Gladiator.

“It’s been a long time in the making,” said Mike Szymkiewicz, Senior Manager of Product & Volume Planning for FCA Canada. “When our teams go out to Moab and the Rubicon Trail, we get a lot of feedback from enthusiasts.

“We’ve been out of the market for close to 30 years. But the segment is growing, the truck is right, and we think it will be a great fit.”

Jeep made its first pickup, a one-ton truck, back in 1947. At that time, the nameplate was owned by Willys, which kept using it after it finished building the original military model during the Second World War. It was followed by the FC, Gladiator, Scrambler, and Comanche, which finally ended production in 1992.

There was never any question of whether to bring the new Gladiator to Canada, Szymkiewicz said. The midsize truck is still a small segment, but it’s growing: in Canada, it was only 0.8% of the market in 2014, but it has grown to 2% since then. It’s actually expanding at a quicker rate than in the United States, where it has grown by 90% from 2014 to 2018. In the same period in Canada, it has grown 126%.

“When GM brought its midsize trucks to market, we looked at it closely to see if it would cannibalize light-duty, and we didn’t see an impact. The half-ton truck has gotten bigger over time and, for a buyer in an urban market, a midsize truck is easier to drive and park and could be a better fit for someone in those spaces. For pricing, on some of the (midsize) trucks, if you tick the box for a few options you can get close to or above a comparable light-duty, but there’s room for both.”

A truck from the ground up

Szymkiewicz emphasizes that the Gladiator isn’t just a Wrangler with a box on the back. “This was engineered to be a truck. It has a unique frame, and a rear five-link suspension that’s unique to Gladiator. The grille slots are widened to improve cooling for towing. This truck will be able to tow 7,650 lbs, which is best in the segment, and will have a best-in-class 1,600 lb payload.

“Our messaging is going to focus on this being a truck, not a modified Wrangler. But it will give you everything that makes a Wrangler cool. You can get a manual transmission, the windshield goes down, the roof comes off, and the doors come off.”

The Gladiator is expected to hit the showrooms sometime in the second quarter of 2019. It will launch with a 3.6-litre Pentastar V6 engine, as is used in the Wrangler, with a six-speed manual or eight-speed automatic. The following year it’ll be joined by a 3.0-litre EcoDiesel making 442 lb ft of torque. That’s the engine currently available in the Grand Cherokee and Ram 1500, but will be tuned specifically for the Gladiator. Four-wheel drive will be standard across the lineup. Trim levels will be the Sport, Overland, and the hard-core Rubicon, which will have 33-inch off-road tires.

The stock roof will be a removable soft top, while an optional removable hardtop will be available. As on the Wrangler, it will have front panels that can be popped out for a more open-air experience without having to remove the entire roof. And unlike a Wrangler where storage space is more limited, owners can take the panels with them by just tossing them into the truck bed.

While the Gladiator will compete with all of the midsize trucks on the market, Szymkiewicz said that, with its rugged demeanour and off-road ability, he expects buyers who “want to get out on weekends” to primarily cross-shop it against the Toyota Tacoma TRD Pro and the Chevrolet Colorado ZR2. He’s also not upset that Ford has announced it won’t be bringing a Raptor version of its new Ranger to Canada.

“It surprised me a little bit, but it’s good for us. I don’t know if having Gladiator will affect (that decision) but it wouldn’t surprise me if they brought something to market down the road. I’d rather they not be in the market with the (Ranger) Raptor, but if that did happen, I think we could go head-to-head with it.”

He also thinks the Gladiator may initially steal some sales from the Wrangler when it first hits the market, “but as time passes, I think there’s room for both these vehicles. I just came back from Moab, and you see some of the hard-core off-roaders who use the Wrangler in these crazy environments, and they like that design and configuration, plus there’s a lot of history, so I’m confident there’s room.

“I haven’t driven the Gladiator yet, but I think it’s officially the coolest thing we make. Jeep’s the number-one SUV brand in the country and they’ve nailed it with this truck. This one won’t blend in.”