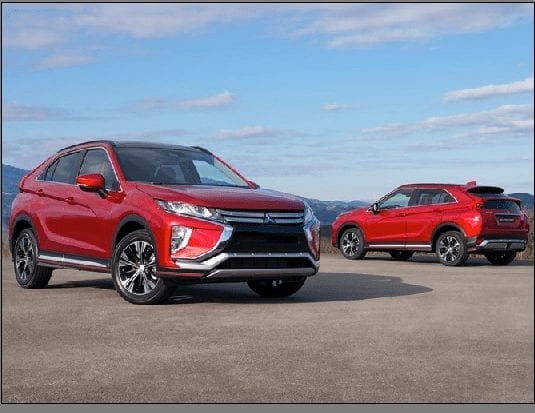 Mitsubishi Motors, which has been peddling vehicles in Canada since 2002, has announced a fairly bold strategy. With compact crossover sales going gangbusters, moving forward it has announced it will become an SUV company, pouring its R&D into these vehicles and essentially abandoning passenger car development altogether.

And leading the charge on the sporty side is this, the Eclipse Cross. Paying homage to the brand’s popular two-door coupe/convertible from 1990-2012, this is an SUV in the BMW X6 idom, albeit on a smaller scale.

Mitsubishi says its aiming this vehicle at Generation X and Millennial buyers, successful professionals that don’t have kids or perhaps are empty nesters. The aim is to provide a sporty driving and ownership experience, distinctly different from the brand’s Outlander model.

In an era where its often difficult to tell one vehicle apart from another, the Eclipse Cross is definitely distinctive, particularly with its aggressive sloping roofline and dual pane rear window. And despite a relatively small glass area, the Eclipse Cross offers surprisingly good exterior visibility, aided by large rearview mirrors and of course, the optional multi-view camera.

Inside, is where the attention to detail can really be felt. Mitsubishi has paid special attention to upgrading interior materials, details and functionality. Neat touches such as adjustable fore and aft rear seats, plus a retractable heads up display located in the top of the instrument binnacle are cleverly thought out details, plus the HUD, which is clear to read under almost all conditions won’t require special windshield replacement in the event of cracks or damage, a significant cost saving for owners, lessees and fleet operators.

Sitting in the driver’s seat gives the feel of piloting a fighter jet and sound ergonomics make the cabin a practical and inviting place to be. The prominent 7-inch display screen is easy to use, either from the touch display or a nifty console mounted track pad.

In terms of driving dynamics, the Eclipse Cross delivers exceptional road holding and stability, aided by the Super All-Wheel Control system that, in this application uses braking to support the amount of torque to the left and right wheels. Sensors also gather input from steering angle, wheel speed, yaw rate, braking pressure as well as engine torque output and transmission gear ratio. The result is a vehicle that feels quick in a point-to-point sense and sure in its footing. On twisting roads, it really comes into its own and three settings, Auto, Gravel and Snow allow the driver to adjust the system depending on the conditions.

If there is any area where the Eclipse Cross perhaps falls short it’s in the powertrain department. The new 1.5-litre engine and CVT just don’t quite seem to belong in such a sporty package. While the manual gear select function is welcome for more enthusiast driving, the engine and transmission combination feels like it is frequently working hard under all but the lightest throttle openings. A measure dictated by corporate average fuel economy requirements, the powertrain is nonetheless backed by Mitsubishi’s 10-year/160,000km warranty which is among the longest in the business.

Mitsubishi deserves credit for taking a stab at something different from CUV norm with the Eclipse Cross and in an increasingly crowded marketplace there are those consumers that will want to consider something that stands apart from the herd.

With Mitsubishi aiming to boost Canadian sales from 24,000 units to 35,000 this fiscal year and compact CUV sales still rocketing, the introduction of the Eclipse Cross could arguably not have come at a better time.