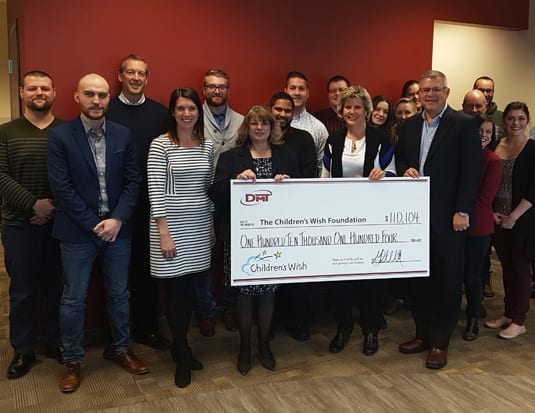 For a third year in a row, DMT Development Systems Group (DMT) has provided Children’s Wish Foundation, Manitoba & Nunavut Chapter with the largest corporate donation in the Chapter’s history. This year they donated a record sum of $110,104.

“We have been working with DMT since 2014, when they came out of nowhere only to surprise us with a record breaking donation. They did it again in 2015 and now again in 2016. Achieving a donation of this magnitude three years in a row is astonishing and a true testament to the character of their people,” said Maria Toscano, Provincial Director of Children’s Wish Foundation, Manitoba & Nunavut Chapter.

The funds are a result of DMT’s internal giving program known as “Payroll for the Needy”, which selects one charity per year as part of the company’s philosophy of giving back to the community. Driven by voluntary employee pledges, staff contributions are matched dollar for dollar by DMT.

“The success of this campaign lies entirely within the hearts of our staff. The unbelievable level of generosity and caring they display is a testament to their character and leaves me feeling incredibly proud to be part of their team,” said Glen Demetrioff, President and CEO of DMT Development Systems Group.