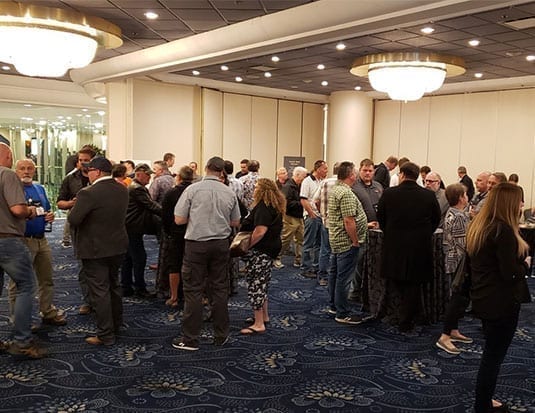 The Alberta Automotive Recyclers and Dismantlers Association (AARDA) conducted its 2019 Annual General Meeting and Trade Show from September 19 to 21 at the Fantasyland Hotel in Edmonton.

The attendee turnout this year was more than 160.

The event kicked off with an informative tour of the North American Powertrain Components facility on the evening of September 19. Vice President Todd Crane and his staff showcased the type of work done at the facility to the group of attendees. Crane’s team treated the visitors to dinner at Bubba Gump’s restaurant at the end of the tour.

On September 20, Friday, the Automotive Recyclers of Canada (ARC) conducted their Annual General Meeting at the hotel. A welcome registration reception, sponsored by Impact Auto Auctions, was held by AARDA in the evening. ELV Select demonstrated its fluid draining station outside the hotel. The demonstration was successful and was repeated several times the next evening as well so that all attendees would have the chance to see the equipment in action. Eagle Tec Recycling supplied the vehicles that were used during the demonstration, while Finning of Canada provided the loader.

AARDA conducted its Annual General Meeting, which was sponsored by Saskatchewan Government Insurance (SGI), on September 21 from 9 am to 11 am. Executive Director of Automotive Recyclers of Canada (ARC) Steve Fletcher presented at the event, providing updates regarding ARC’s activities. Sandy Blalock from the Automotive Recyclers Association (ARA) also spoke at the meeting, updating attendees regarding ARA and its Canadian partners.

Other speakers at the meeting were: Jeremy Brown from Group Health who gave details of the company’s offerings for AARDA members; and Malcolm Knox, CEO of AMVIC, (Alberta Motor Vehicle Industry Council) who provided key information regarding auto recyclers licence requirements in the province.

Board member Kelly Popow from Popow’s Auto Recycling gave up the board position this year. The place was filled in by Michael Allen from Allen and Sons who was elected during the meeting.

Attendees had the opportunity to tour the Aldon Auto Salvage facility after the AGM. They visited Al’s Toy Barn, a museum featuring three Quonset huts that house vintage cars and other antiques.

The much-awaited trade show took place on September 21 from 4 pm onwards. With 21 vendors participating in it, association members and other guests had a gala time browsing through, partaking a buffet dinner in between and watching the ELV demo. The three-day event ended on a charitable note. A silent and live auction was held to donate funds to the Jack Cohen Continuing Education award. AARDA handed over funds to the two award recipients—Justin Morlock through A1 Willy’s of Red Deer and Tianna Eleniak through Aldon Auto Salvage. Both of them received $2250 each. A total of $6354 was raised at the auction.