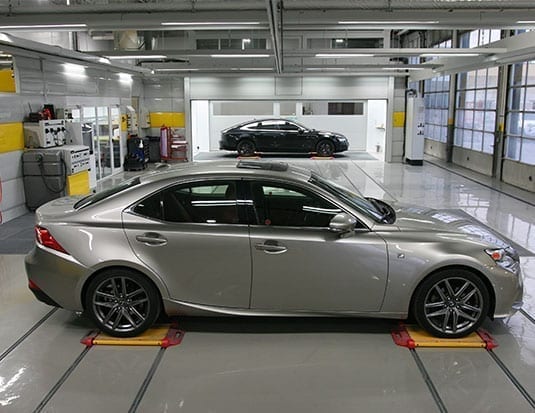 “I wanted to build the perfect facility,” says Josh Kazdan, Owner of Better Image Collision. “With Symach technology and equipment, we can be the provider of choice and employer of choice. Our shop looks and operates drastically different than other shops. I truly believe this was the only way to go, given that the playing field has changed before our very eyes. I wanted to be prepared for the future of the collision industry.”

Kazdan wished to install Symach equipment ever since he saw an advertisement of the company’s products and services in a collision repair magazine. He was especially impressed with the way the equipment made a collision centre look clean, futuristic and out of this world.

Kazdan also considered speed as an important factor in his decision to purchase Symach equipment. He believes that in addition to keeping up with the demands of insurance companies, the equipment will enable the shop to repair cars faster for out-of-pocket customers. Symach’s patented drying process helps in carrying out a concrete repair from the beginning stages to the final product. The repair facility is now in a position to do one-day repairs on small collision jobs. The result will likely mean happier customers with quicker turnaround and fewer rental days.

Symach has installed its FixLine system in the repair facility. The system has two filler bays, the SprayTron prep stall, a FlyDry robot and an oversized mixing room, which is commonly known as its “paint lab.” Besides having side-load doors, the nine-metre paint booth also comes with an EasyDry robot. Kazdan is highly impressed with the actual paint jobs done in this paint booth.

The facility now has a carwash detailing bay and two Symach frame machines. Its in-ground hoists ensure that technicians don’t have to crawl on the floor to work anymore.

Kazdan always envisioned a modern, upgraded body shop. Since it is the first one of its kind in the Niagara, region, he hopes to attract like-minded technicians who want to work in a shop like his.

He also wishes to continue his journey to PCE (process centred environment).

“I was really working on setting up the ultimate shop for lean production,” explains Kazdan. “I wanted the correct layout for processing repairs properly and efficiently, and having the best equipment means we can throw a huge volume of vehicles into our shop, repair them to the highest standards and never bottleneck the system.” Symach, therefore, seemed like the perfect solution to him.

Working out of a 2,000 square-foot shop, Kazdan established Better Image with a friend in 2001. To continue growing his business, he moved to larger facility in 2009. He received a “Top 40 Under 40 Business achievement award” in 2017. This encouraged him to dream about opening a second facility.

During his search for the second location, he began collaborating with Osvaldo Bergaglio, CEO of Symach. The plan for the facility’s layout and design was created at this time. Additionally, Kazdan took feedback from body shops that used Symach equipment to ascertain that he was taking the right decision.

Kazdan is satisfied with the result of the year-long journey. The construction is complete, all technicians are trained and only the final touches remain. The second Better Image facility is currently operational.

“Now, I have the ideal set up for a body shop and can unlock my doors, walk into a calm, clean working environment—somewhere where people enjoy working,” says Kazdan. He is thankful to Symach, AkzoNobel, and Treschak Enterprises for their constant support over the years.