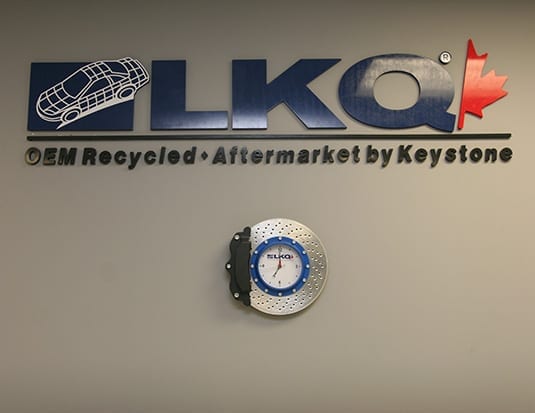 On October 10, LKQ hosted an Open House at its Toronto East Distribution Centre in Whitby, Ont.

The facility which has been operated by LKQ since November 2017, has had a significant impact on the distribution network for automotive mechanical, collision and heavy truck parts in the region.

“Inventory was never really the problem in this area,” says LKQ Toronto East General Manager Amin Youssef. “A bigger concern before we opened this facility was where our inventory was located.”

Yousef notes that since the centre opened the feedback from customers has been “nothing short of incredible. We’ve seen an exponential increase in orders and we’re getting more and more customers because they like the idea of same-day availability on the items they need.

Yousef also says that with LKQ continuing to grow and adding more lines, “we’re no longer just an automotive resource, but one for your entire transportation needs.”

He also notes that besides providing a faster, more effective distribution hub for customers in Durham Region, the centre is also proving to be a significant part of the local community in its own right.

“In addition to events like this open house,” says Youssef, our goal is to let people know that not only are we here to operate a business, we’re also here to give back to the community.”

The facility features a second-floor training centre, where schools and members of the community can host training and orientation sessions. “We have almost 5,000 sq. ft. available for training,” says Youssef “and we want help the community as much as we can.”