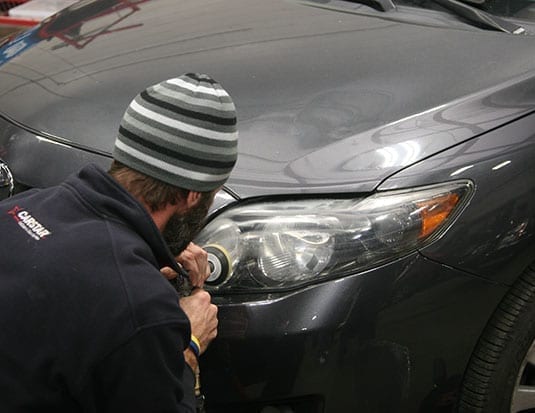 In the first of a two-part series, we look at the benefits of operating satellite collision facilities.

As anyone with a smartphone knows, we may have more technology to make our lives easier, but somehow, we’re busier than ever.

“People have less patience, their time is valuable, and they’re looking for convenience,” says Arnold Dixon, owner of CARSTAR locations in Brockville, Perth, Smiths Falls and Gananoque, Ontario. He also owns three car dealerships and six car rental facilities in eastern Ontario. And that’s why he chose to build an express collision repair in Smiths Falls.

“It’s a smaller town where many people commute to Ottawa,” says Dixon. “We can do small repairs like dents or blow-ins, repair a headlight, instead of having people drive all the way to Perth.” He notes that Smiths Falls is halfway between his two other collision repair facilities in Brockville and Perth. “If it’s a bigger repair, where a fender has to be replaced, at that point we move them to a full-size body shop.”

A small repair is anything that takes about two to three hours. “We can also do estimates there, order parts and help with the overflow from other locations,” says Dixon. “There’s also a car rental location, which is hugely important, making it as convenient for the customer as possible.”

It’s all about convenience, according to Dixon. “They can come to a CARSTAR location, get the same lifetime warranty; great job with professionalism without having to drive another half an hour,” he says. “We have car rental on site, so rather than going to two or three different locations, you can do it all right in one place.”

He says cycle times depend on how busy the shop is, and if he has to order parts. “Parts are the big quandary these days. There are some parts that are hard to get,” explains Dixon. “For some reason, the manufacturers and suppliers are having a hard time getting parts. That creates an issue trying to reduce our cycle times and reduce the time that we have with the customer’s car.”

Dixon’s express location has been running for about five years, to great response. In fact, he has opened an appraisal centre in Gananoque, which operates on the same philosophy. “I opened it in a building that I own there, which also has a quick lube, car wash and car rental,” he says. “I thought I might as well put in an appraisal centre, and people in the area can get it appraised and load level mostly to Brockville. We do less repairs in Gananoque because we don’t have the painting equipment.”

“I think it’s important to keep it all under one umbrella. My next shop will be for windshield repair—once you get people coming to you for one automotive thing, they can see you can do other types of service for them.”

“We’re trying to grow our customer base and loyalty, so they don’t have to go to three or four different places that specialize in one thing.”