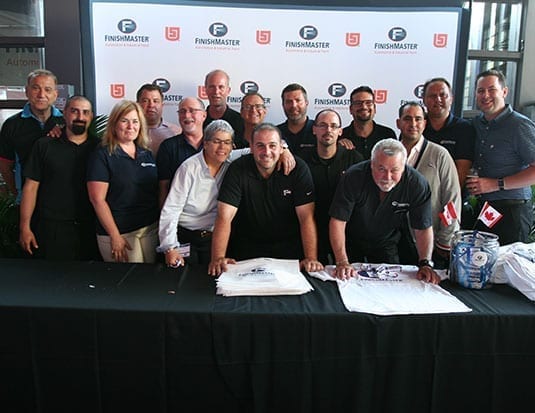 The event took place at the Steamwhistle Brewery, which occupies the historic CN Roundhouse in downtown Toronto and was organized by FinishMaster’s four Ontario locations in Guelph, Ottawa, North York and Scarborough.

The setting itself marked a departure from traditional trade show venues but as Jeff Murphy, Director PBE Sales, Eastern Canada for FinishMaster’s parent company Uni-Select said, “we wanted to do something out-of-the-box and get people out of their comfort zone.” Murphy also notes similarities between the brewing business and collision repair, having worked in both sectors. “In both industries you’re dealing with franchise networks, multi-location and independent operators,” said Murphy. “In both industries it’s also about creating a quality product and having a set of processes to make that possible.”

With over 200 attendees, some from as far away as Ottawa, the event had plenty to take in, including interactive vendor displays, as well as the opportunity to look at and discuss the latest tools and technology to help shops repair vehicles in a rapidly changing marketplace. There were also ample networking opportunities and evening prize draw.

With FinishMaster still a young brand to the Canadian collision marketplace, successful events like this are helping to cement its reputation as a premier distributor of collision repair parts and services each and every day.