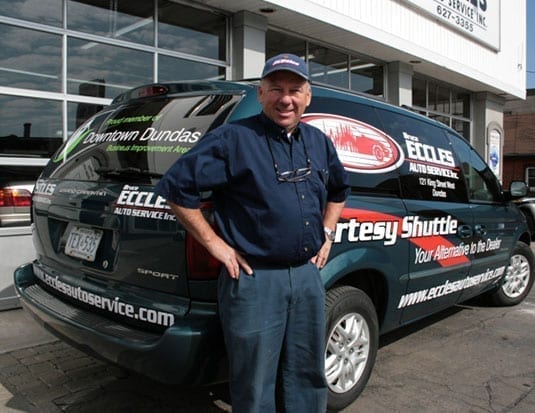 Bruce Eccles of Eccles Auto Service is retiring after serving the aftermarket for 44 years.

Since his first entry into the industry in 1975, Eccles has been a licensed technician, a shop owner and an entrepreneur. After attending Mohawk College, he moved on to his apprenticeship and thereafter completed 4000 hours of training to be licensed as a technician.

Have gained some experience in the industry, Eccles first considered owning a shop in 1983. With the intention of taking over, he joined Westdale Gulf and did so within a year. However, with three months remaining on his year-long lease, it wasn’t renewed. His luck turned when a different shop in Dundas became available. With the purchase of the shop, Eccles transitioned from a technician to a shop owner.

Eccles did not stop with his first shop; he went on to purchase a bigger one in 1992. He was able to grow his business by fostering good relationships with his customers and business partners, including suppliers.

Eccles built his business on four key values: keep learning, get involved, get good partners and support your community. Following in his footsteps, his son Scott became a licensed technician in 2007. Scott went on to open a second Eccles facility—Uptown Eccles. Currently, the business has two fully functioning service shops and a tire warehouse. They have 9 bays with room to hold up to 14 vehicles.

For Bruce Eccles, 2010 had been the best year that his business had seen to date. He credits this to a fantastic team of dedicated employees and management processes that worked. He has slowly transitioned the business over to his son since then and is finally ready to retire.

“It’s been a wild ride, and I loved every minute of it,” he says.