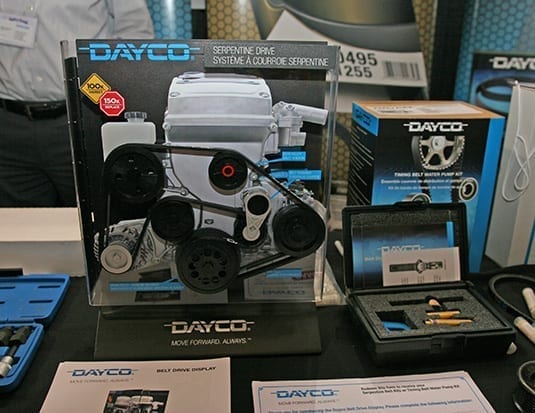 Better for shops, better for customers.

When it comes to automotive parts, the hose and belt world has seen significant changes. A big factor that has restructured the way jobbers manage “rubber parts” has been the “change” in materials from Neoprene to EPDM (Ethylene Propylene Diene Monomer). Instead of cracking, belts now tend to wear down over time in a similar fashion to tires, so manufacturers have created tools to help service technicians assess belt condition.

Belts are called on to do a lot more today than in the past. Initially, vehicles had multiple belts, and when one failed the car stopped. From the late 1970s, these were gradually replaced by serpentine belts which addressed the entire pump and accessory needs. Initially they drove just a few items like the alternator and water pump. Today, a serpentine belt may have as many as 10 contact points with a complex routing that offers a lot of opportunity for wear and misalignment.

The other aspect of the belt market today—and this applies perhaps even more acutely to hoses—is the proliferation of brands and models.

Tyler Samagalski , Director of Aftermarket, Canada for DAYCO, says that in the past, a few belts on the garage wall covered virtually all installations; today you need access between 350 and 400 different SKUs to cover 90 percent of the market.

According to DAYCO’s sales stats from Alberta, the top ten belts cover about 20 percent of vehicles, but you’d only cover 65 percent with 100 different belts. In summary, the jobber needs a pretty complete line-up, or at least the backing of a good warehouse. Fortunately, quick delivery practices within the supply chain mean that belt replacement can still be done quickly. The same is true of hoses, but even more dramatic. To cover 90 percent of installations today (service and coolant hoses) you need approximately 700 SKUs.

Prevention rather than repair

Jim Voigt of Columbia Auto Service in Waterloo, Ont., points out that since hoses and belts last longer thanks to improved materials, servicing them today calls for a different and better approach. Instead of dealing with catastrophic failure or obvious signs like a cracked belt, the philosophy has shifted toward preventive maintenance. Voigt recommends a semi-annual inspection to stay ahead of any problems. “It’s better by far for the customer, and it’s a better business model for the shop, too. We can schedule inspections rather than deal with emergencies.” For example, while timing belts last longer, Voigt recommends changing at 160,000 km.

What was once a straightforward category, is decidedly complex today. Around 40 percent of DAYCO representative sales calls are for training on top of the clinics the company regularly provides, according to Samagalski. Education, not only for the technician and jobber but for customers, too, is an essential practice today. The upside is that there tends to be fewer belt failures due to better parts and better education.