Spectra Premium Drivers in Top 8 at the GP3R 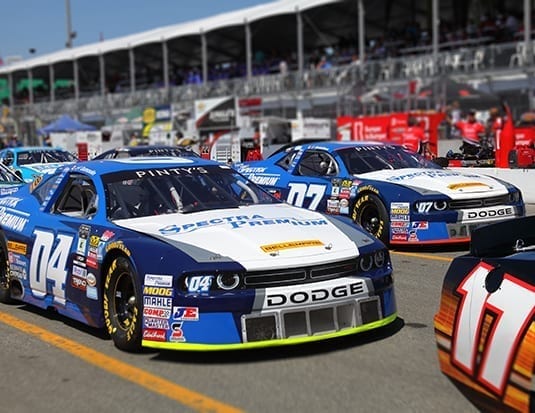 The first half of the Canada-Europe exchange has been a great success.

Both drivers pushed their cars from start to finish, fighting for every spot on the track over the 50-lap race. The show put on by Jean-François Dumoulin, a regular from the NASCAR Pinty`s Series and Frédéric Gabillon, championship leader in the NASCAR Whelen Euro Series was one of the most spectacular in the history of NASCAR racing at the GP3R.

Frédéric Gabillon spun on lap 24 moving from 8th to 16th after a hard bump from a competitor. “I knew that the race was going to be pretty busy, and that spin put me behind several slower cars. Then I hit someone in front of me on a later restart, closing up the opening that brought air to my Spectra Premium radiator. The radiator was not damaged so there was no leak and I could continue and finish the race” added Frédéric Gabillon.

Jean-François Dumoulin jumped from a third-row start up to 5th, then up to 3rd, which he held on to for the better part of the race before losing one position, just missing a podium finish with a 4th place finish. “My car worked great throughout the 50-lap race, especially when fighting off typical NASCAR bumps and pushes over the eight restarts. Passing people on the tight Trois-Rivières layout was never easy but I had the car to do it! I enjoy these hard fights and we will be back for more,” concluded Dumoulin.

The second half of this exchange program will take place over the October 19 weekend at Zolder (Belgium), where Jean-François Dumoulin will drive in the two-race final event of the NASCAR Whelen Euro Series, aboard the #04 Spectra Premium car.