AARO Symposium: Focusing on the Future 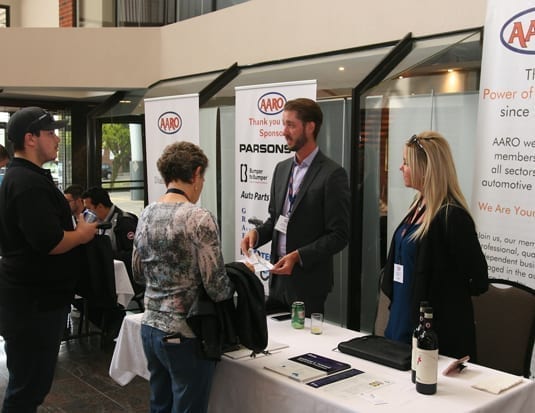 Hosted at the Holiday Inn at 590 Argus Road, in Oakville, Ont., this year’s Automotive Aftermarket Retailers of Ontario (AARO) AGM, Symposium and Trade Show was a worthwhile event for those that attended.

On Friday, October 20, AARO held its annual general meeting, while the following day ushered in the Symposium and on-site trade show. At the former, a range of high caliber guest speakers provided some fascinating insight into various different subjects.

He also noted that there is very little communication between OEMs, dealers, software companies and service providers and that disconnect makes it challenging to get the right information when it comes to fixing problems. Looking to the future, Seyfer noted that if vehicle ownership is increasingly placed in the hands of fleets and OEMs, or moves to fractional ownership models among multiple consumers, it could provide considerable opportunities for the aftermarket.

Examples include more frequency in vehicle maintenance and service, since if vehicles are in nearly constant use because of near constant demand, they could rack up to 14,000 miles (22,000 km) in a month and require major repairs on a far more regular basis, compared with the current situation where maintenance intervals are becoming increasingly spaced out.

Such scenarios will mark a radical change in the automotive service business model which today, is often focused on preventative maintenance such as oil and fluid changes and brakes, aspects that will likely disappear or significantly change if electric vehicles become more widely adopted.

Also, Seyfer said that if we enter an era where vehicles are modularly designed and increasingly rely on electric powertrains, it could be far easier to simply transfer or add new battery systems, motors and software between vehicles, meaning that the role of future aftermarket technicians could very well be similar to that of computer programmers and software engineers.

He also noted that the biggest obstacle to all this concerns what he dubbed the “last mile or last 100 feet.” Technology enables deliveries to be brought to the curb, but how do you get the delivery from the vehicle on the sidewalk to your front door without human intervention, such as furniture or pizza? “The last 100 feet is often the biggest challenge when it comes to new technology,” he said.

Seyfer also noted that the widespread adoption of autonomous vehicles could also cause rapid job losses across many sectors of the economy and that it could be a significant time before new jobs and opportunities are created to replace them. That in turn could make it tougher for those within the entire automotive eco system to earn business, at least over the short and medium term.

Inter-generational wealth management and family business expert Dr. Tom Deans, talked about succession planning in family businesses and how business owners need to start thinking about the issue as soon as possible. “Procrastination is dangerous,” he said. Deans noted that people are living longer and the digital revolution will likely have profound effects on all industries. He said those business that are likely to be the ones that succeed in the future are those that are built from the ground up with an eventual sale in mind. Additional factors that look attractive to potential buyers will include solid financial statements, healthy cashflow, sound investments, diversified revenue strategies, infrastructure commonality with other businesses and key employee job descriptions.

“The goal,” he said, should be “to have somebody come in and run your business. Savvy business buyers will take you out for dinner and ask you about yourself, not your business. If you say I’m hardly ever there because there are systems in place and the business practically runs itself, you will end up with that rare gift of both time and money,” said Deans.

Other presentations came from Kirk Argo, Regional and National Accounts Manager at Uni-Select. Argo  talked about a range of products and services the company offers through its various programs—including Bumper to Bumper, Auto Parts Plus and Auto Select—to help its members grow their business on both the parts supplier and automotive service repair side.

The Ministry of the Environment and Minstry of Ontario also provided updates on the Drive Clean and Service Inspection programs, while rounding off the speaker sessions was David Chalk, CEO of Chalk Media and a leading expert in the field of information technology.

Providing a high-level view of the future of technology, with references to the automotive sector, Chalk emphasized that cyber security is becoming an increasingly important issue as we enter a world where more and more devices, from cars, to computers to homes are connected. He noted that today, hackers can quite easily take control of a car or even an airliner with potentially very deadly consequences and that there simply isn’t enough focus on building security to prevent such scenarios.

Chalk also talked about the need for businesses to innovate in order to prepare themselves for this brave new world and that in the automotive sector, battery technology and software is on the cusp of revolutionizing the concept of the automobile as we know it. “Parts and components for the automobile in the future will be apps,” he said.