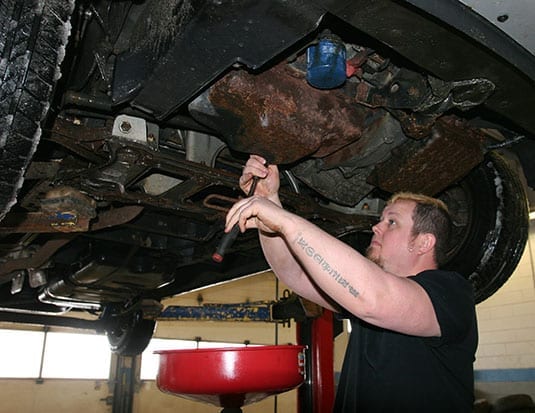 When Fernando Francisco saw a veteran technician about to pour the wrong oil into a customer’s vehicle, he stopped him cold.

“The engine required 0W-30 and he was putting in 5W-30,” recalls Francisco, the Owner/Operator of Toiro Car Care. “The only reason I knew that was due to my quick lube background.” He’s been in the business for over 20 years, and now owns both a quick lube operation as well as a full mechanical repair shop.

The error wasn’t the tech’s fault, but due to the shortcomings of a software package that he was relying on. “The software didn’t have the capability to advise us of the proper oil recommendation,” Francisco says. “If you put the wrong oil into a customer’s vehicle, not only would it jeopardize the warranty but also wreak havoc on the engine.”

Software is key
Francisco has a software system called LubeSoft at his quick lube location, and wasted no time installing it at his mechanical repair shop. “Operators may not want to spend thousands of dollars on a software package, but it‘s a necessity,” he says. “There are so many different oils out there, and they’re changing all the time. That investment is worth its weight in gold.”

He also counts on his oil supplier representatives to keep him abreast of what’s coming down the pike. “I have a very good relationship with my reps,” says Francisco. “I see them every couple of months, and they’re very good at letting me know what’s going on.”

At April Group, keeping customers abreast of the latest developments in lubricant technology is a top priority, in fact, the company received ISO 9001: 2015 accreditation for its customer service and support.

In regards to why we’re continuing to see proliferation in more spec lubrications, Nathaly April, Vice President, April Group, says that, “current emissions standards are putting enormous pressure on OEMs to develop new engine technologies.” She also says that because OEMs develop their technologies independently, lubrication requirements for one OEM may be quite different than that of another, resulting in many different oils.

Ian Hutchison, Marketing Manager for Castrol at Wakefield Canada, says you can have upwards of 10 versions of 5W-30 alone, with different specifications for different manufacturers. “It’s only trending to be even more that way,” he says.

Wakefield provides an online oil chooser service where a shop can input the manufacturer of a vehicle, the model and year, and find the appropriate product and specifications for that vehicle’s fluids. “There are a number of online tools available,” notes Hutchison. “It’s of paramount importance to get the right product for the right cars. If you put in the correct grade but without the correct spec, you can have a catastrophic engine failure.”

Tailor-made
Nathaly April says that while modern oils don’t require more additives, they do use a specific combination of base oils and additives. “This allows them to meet OEM, API, ILSAC and ACEA specifications. Everything is tailor-made,” she says.

Wakefield’s Hutchinson notes that Castrol has its own proprietary additives, “everything from dispersants to anti-sludge elements— our premium products use liquid titanium,” he says.

“If you put the wrong oil into a customer’s vehicle, it can wreak havoc.” — Fernando Francisco, Owner/Operator, Toiro Car Care

Francisco couldn’t agree more. “Some of these drain intervals are questionable,” he says. “It’s very misleading for the customer because they could end up changing their oil once a year, which is doing more damage than good if they don’t do a lot of driving. You have to talk to your customers and find out what is going to work best for them.”

The various oils have also become more complex because manufacturers want to ensure they meet all American Petroleum Institute (API) specs. “They’re using more specialized oil,” says Francisco. “And it’s more expensive to do an oil change with 0W-30 than it is with conventional oil. But the product that’s being used today is far superior than ever before.”

Oil associations
While North America has the API, Europe has the ACEA, which is a vehicle manufacturer association, setting standards. ACEA sets the criteria for making oils to protect engines in that market,” says André Bolduc, Service Technical and Commercial Consultant, Total Canada.

“In the 1990s, when these criteria were developed, this was fine. But even then, the drain interval norm in Europe was higher than what we had in North America—up to 50,000 kilometres for diesel.”

Now, every manufacturer uses different technologies to build their engines, so the criteria has expanded. “All these different specifications are targeted at specific problems for every manufacturer,” says Bolduc. However, he believes the API is holding up the possibility for even better oils.

“The API has tests and requires licensing of products, which slows down the process,” Bolduc says. The API tests are 40 to 50 years old. “The API is setting the norm, and they are setting it too low,” says Bolduc. “These tests are virtually meaningless in the age of new technology.” By 2018, the new oil standard will be 0-16. “In Japan, Toyota and Honda have already been using 0-16 for four years. They have no issues with their engines. So we will be five or six years behind Japan.”

Bolduc believes there should greater collaboration between the different international petroleum associations. “The North American API, the European ACEA and the Japanese association are trying to talk to each other,” he says. “If there’s a way we can merge these organizations at a faster pace, it will benefit everyone.”