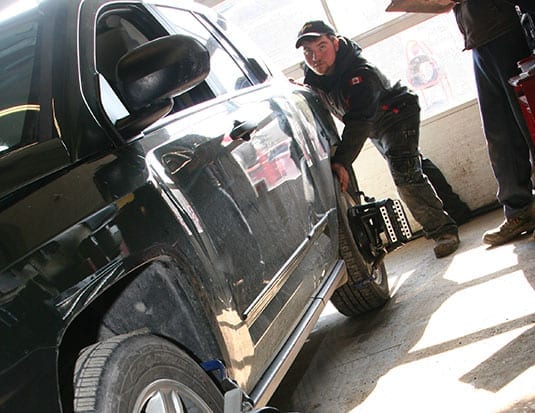 Chris Kinghorn, the new Regional Vice President, NAPA Ontario, is a highly personanle and astute young man with a passion for the automotive industry he acquired early.

Chris spent his formative years wrenching with his dad, a mechanic who restored classic cars. This early passion for all things automotive planted the seed for a remarkable journey.

Chris initially had plans for college, but a job washing cars and changing tires at a small dealership in his hometown in rural Manitoba quickly led to a rotation through service, parts and, eventually, sales. He set his college plans aside and, when opportunity knocked, moved to a bigger dealership in Winnipeg. That’s when his career quickly took off. Chris gradually developed an interest in the corporate side of the business— an interest that led to his first stint at UAP, as a Multi-Line Sales Specialist, commencing his career in the Aftermarket.

A year and a half later, Chris took on Banners and Major Accounts for Manitoba, Saskatchewan and Northwest Ontario, running the NAPA AutoPro program—his chance to learn the aftermarket garage business. A few years later, he became the District Sales Manager for NAPA corporate stores in that region.

Back to school
Even with a growing career, however, Chris’ thirst for knowledge remained fierce. He’d put his college plans aside but never really overlooked them. And so, while still working as District Sales Manager, Chris enrolled at the University of Winnipeg. Evening and weekend classes eventually allowed him to earn a Management Certificate and a Marketing Management Diploma. But even these accomplishments weren’t enough and Chris set his sights on an MBA—which he earned in 2013, after a combined seven years of university studies. The homecoming

The homecoming
Chris briefly left the automotive industry to run the Farm King Division for Buhler Industries, but still kept in touch with NAPA. As it turned out, his time away was brief and by February 2014, he was back as General Manager of NAPA’s Winnipeg based operations, where he and his team racked up some remarkable achievements. “It was just like coming home,” he says.

Indeed, in 2016 Chris assumed the role of Vice President for the NAPA Ontario Region. “Ontario is a whole new experience, with its own challenges,” says Chris. “I’m lucky to have such a supportive family to ease the move and the transition. They embraced this opportunity as much as I did and everybody is happy and enjoying our new life in Ontario.

“I’m also lucky to be in a position where I can provide direction and create an environment for people to achieve their best. For me it has always been about the people and the connections. If you can work closely with entrepreneurs and build solid relationships, then you can help them achieve their goals. Ultimately, that’s what it’s all about.” Partnerships critical

Partnerships critical
Chris acknowledges that today’s aftermarket is tough for the typical Momand- Pop operator, who has to compete with major chains. “Partnership and a good program are key,” he says. “Especially if you want to attract talent and deal with the threats of e-commerce and the competitive pressures of multi-store chains and OE dealerships.”

Chris singles out the talent gap as an issue in the aftermarket space, where recruits need training for operators to stay relevant and contribute to their local communities. “That’s the exciting part,” says Chris, “because at NAPA we have lots of tools, resources and programs to help business owners navigate these industry changes. And on the bright side, there are lots of opportunities for young people in the Aftermarket. Hey, we’re waiting for you!”