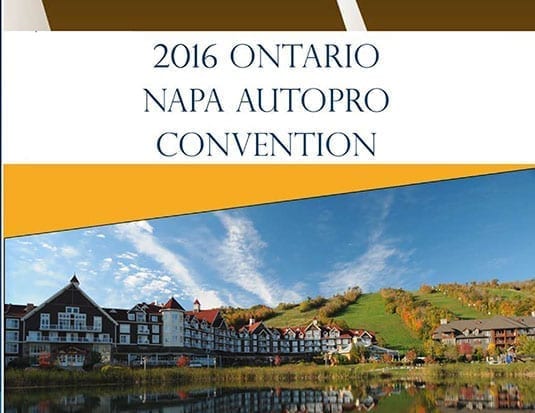 The Autumn colours at Blue Mountains were superb as was the 2016 NAPA AUTOPRO Conference.

The Conference opened with a General Session kicked off by Chris Kinghorn, new Regional Vice President, NAPA Ontario. Chris Gibson was the keynote speaker and gave some very good examples of customer service and sales cultures. He interacted with the audience to prove some of the new standards of customer service.

Then it was time for the Trade Show… and it also was a success. I had someone remark on how pleasant and outgoing the suppliers in the booths were… how well they answered questions and took the time to explain things carefully.

Saturday the General Session speaker was Martin Tremblay of Me Inc. He had two goals—one: “The way to get started is to quit talking and start doing!” This was a quote by Walt Disney and we all know how successful his ventures have been. Secondly: take care of your self and your personal happiness—you have a role to play and you need to be on—like a lighthouse beacon! He also told attendees that branding was a call to emotion and branding works harder than advertising. He went on to give out other excellent ways of being in charge of yourself and your business.

NAPA AUTOPROs had three workshops to choose from: NAPA AutoTech Training; Small Business Programs and, likely the one attendees liked most—Heather Proudfoot’s Digital Marketing and why it is so important now as it will be the future of marketing.

After a successful business day, it was time for the gala dinner, awards and entertainment—supplied by Brent Butt, star of Corner Gas! He was hilarious and had everyone laughing non-stop!

This was a great conference and was exceptionally well attended.