When Driving Becomes a Crime 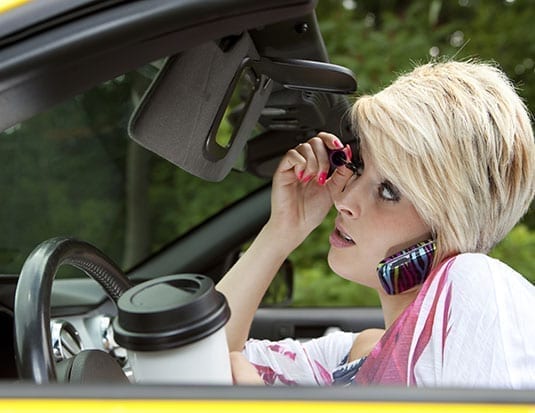 The Ontario Government has stepped up efforts in its battle against distracted driving.

Despite existing legislation, distracted driving continues to be an issue on Ontario roads. According to Ontario.ca, deaths caused by distracted driving have doubled since the year 2000. Sergeant Alexander Crews from the Toronto Police Service says that 1,819 drivers have already been ticketed for distracted driving between January 1 and March 6, 2019.

Ontario’s new (and stricter) legislation has been put in place with the hope that heftier fines and penalties will have drivers thinking twice about multitasking while on public roads and highways.

“It’s not just a ticket and demerit points anymore,” says Crews. “They’re actually losing their license. And there are reinstatement fees to pay, as well as added insurance costs. There’s this domino effect that comes into play if you’re convicted of these charges.”

Distracted driving is defined as driving while using a hand-held communication or entertainment device, including a cell phone, iPod, tablet, gaming console, book, document, or GPS and navigational system.

Above and beyond “distracted driving” is an offence called “careless driving,” which involves actions such as eating, drinking, grooming, smoking, reading and reaching for objects. If caught, drivers face fines up to $2,000, six demerit points, a license suspension of up to two years, and possible jail time (six months).

Finally, dangerous driving (yet another type of offence) is considered criminal and carries with it the possibility of even more jail time.

To avoid charges, drivers can switch to using hands-free wireless devices, or they can turn off their phones entirely. They can also set their phones to silent mode so as not to be distracted with notifications. Similarly, fleet companies can ensure that GPS devices are securely mounted to the vehicle’s dashboard, or that the GPS is part of the vehicle’s infotainment system. Routes should not be programmed into the system on the fly. Instead, they need to be planned and programmed before the vehicle starts moving.

In order to eliminate phone usage altogether, some fleet managers have considered installing an app on drivers’ phones that automatically prevents phone usage while a company vehicle is in motion.

While technology has a part to play in the overall driver safety picture, there’s a human factor at play here as well. One way to ensure each driver’s safety is to make sure they have enough sleep, coffee or food prior to driving.

Experts also recommend regular breaks on longer trips, which means managers need to factor in travel time and rest time when sending employees on an assignment or project.

With the Ontario government getting serious about distracted driving, it’s time for fleets to rethink company policies in order to keep drivers safe, prevent costly fines and license suspensions, and keep our roads safe.