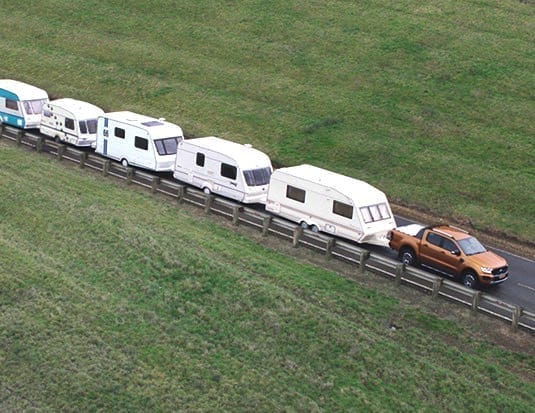 Ford released a new video that demonstrates the extraordinary and effortless towing capabilities of its new Ford Ranger pick-up.

The short clip shows a 210 hp, 2.0-litre EcoBlue Bi-turbo Ranger towing a 20-tonne convoy. Almost 100 metres in length, the convoy consisted of 15 different models of trailers, including, a 1950’s Airstream, a hippy-themed trailer, and a trailer specifically for dog lovers, all reinforced with steel frames and equipped with tow bars front and back.

“This was the slowest stunt I’ve ever done–but also one of the hardest. Trying to keep the trailer on the straight and narrow while the car drove past was a tough challenge, and one that really demonstrates the Ranger’s capabilities,” said Precision Driver Paul Swift, who was behind the wheel of the Ranger.

The film was shot in Millbrook Proving Ground in the U.K. All track activities were filmed on a closed circuit and monitored by Ford’s safety experts.