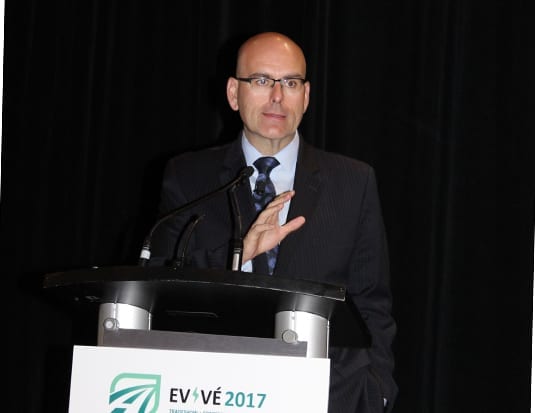 The auto industry and government leaders agree that expanding access to charging stations across the province will help boost electric vehicle (EV) sales.

Speaking on a panel at the Electric Vehicle Conference and Trade Show in Markham, Ontario last week, Ontario Transportation Minister Steven Del Duca said the most significant challenge in bringing more electric vehicles to Canada’s roads is a lack of supportive infrastructure.

Held at the Markham Hilton May 29th to June 1, this annual conference and trade show brings together key players from government and the auto industry to showcase the latest EV technology.

“I think infrastructure, charging stations, in particular, being deployed more pervasively and being available in more consumer-friendly venues is probably the most important thing at this point,” he said.

Ontario will spend $20 million to build nearly 500 electric vehicle charging stations across the province in 2017. Del Duca says the government will work with 27 private and public sector partners to create a network of charging stations at over 250 different locations.

These charging stations will be set up along highways, in cities, and at workplaces, condominiums and some public places. He hopes a network of charging stations will address the “range anxiety” some consumers have about the limits electric vehicles can travel compared with internal combustion engine (ICE) cars  and trucks.