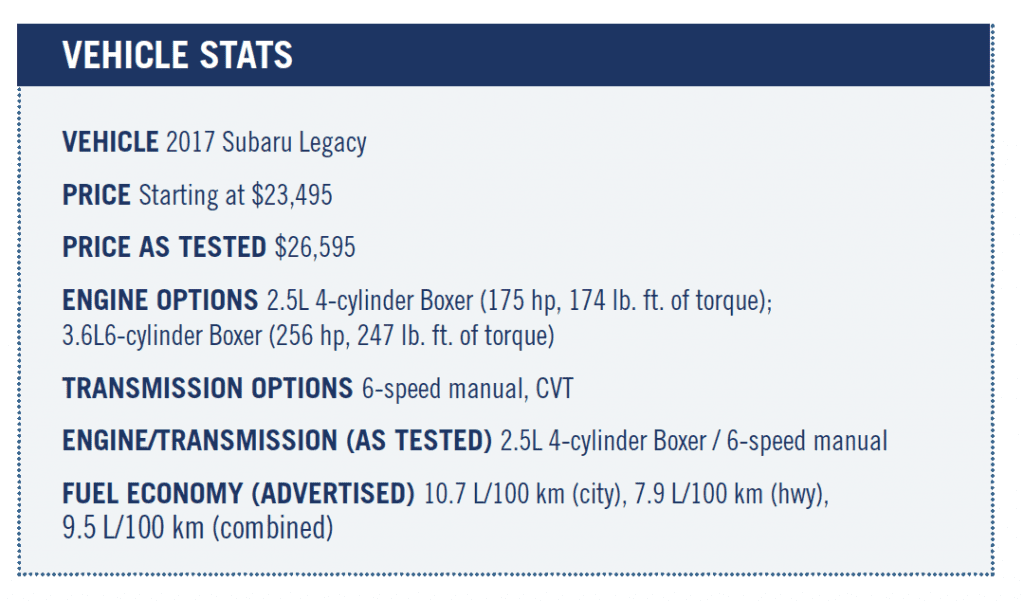 The 2017 Legacy is equipped with Subaru’s latest safety technologies, which translates into peace of mind–for both the driver and the fleet manager.

It has been said that beauty is in the eye of the beholder. To my eye, the Legacy is one of the best looking vehicles Subaru currently offers. But as a fleet manager, you’re probably not interested in the way a vehicle looks. Rather, you have more important criteria to consider.

So let’s talk about safety for a moment. Like all Subarus, the Legacy has been engineered with safety as a priority. We often think about the company’s “Symmetrical All-Wheel Drive” system, which is standard on all Subaru models. Although its benefits are clear in the winter when Canadians have to battle slush, snow and ice, in reality this AWD system is a plus year round.

With all four wheels searching for optimum traction at all times, unexpected slips are all but eliminated, while driver confidence is boosted. Add in Subaru’s Active Torque Vectoring system, and that confidence is maintained, even through the toughest twists and turns. Just point the Legacy in the direction you’d like it to go, and it obeys. 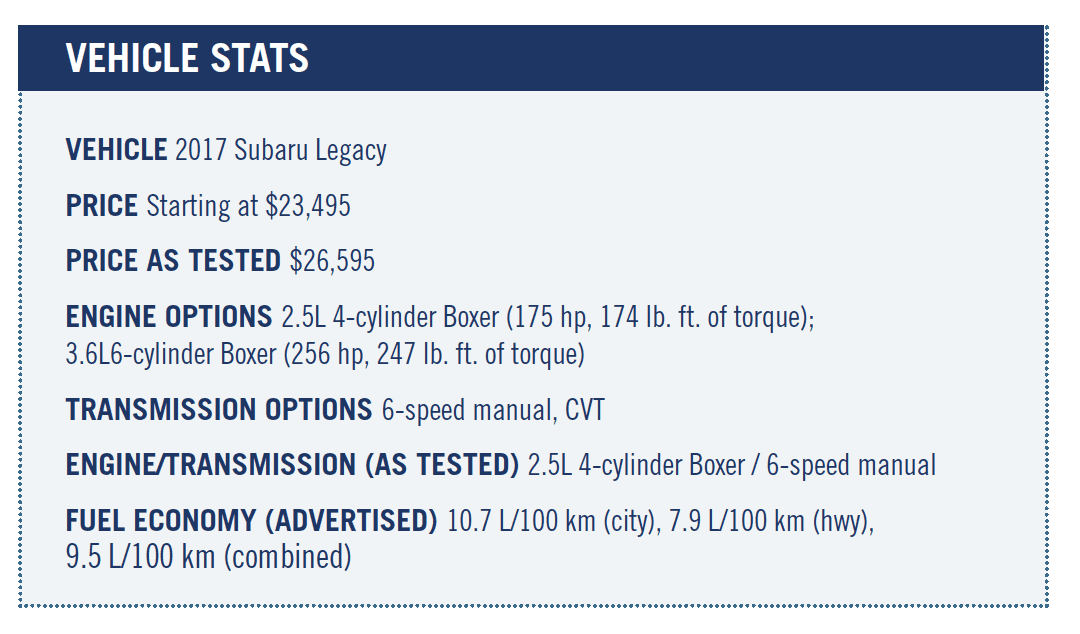 Second set of eyes
Besides multiple airbags and the usual alphabet soup of safety features, Subaru also offers “EyeSight Driver Assist Technology,” which literally gives the vehicle two extra eyes (in the form of two cameras) to watch the road with, on behalf of the driver. Not only does EyeSight warn the driver of impending trouble on the road ahead, but in the right

Not only does EyeSight warn the driver of impending trouble on the road ahead, but in the right conditions it will even apply the brakes to either prevent or mitigate the effects of a collision.

EyeSight can even help when the vehicle is parked. If, for example, the driver were to put the vehicle into “D” rather than “R” when backing out of a parking spot, if EyeSight saw an object (like a wall) in the way, it would cut power to the throttle to prevent the driver from hitting the wall.

EyeSight does such a good job, in fact, that when the Legacy is equipped with the optional EyeSight technology (and HID headlights) it gets a Top Safety Pick + rating from the IIHS.

While both are very capable, we think the 3.6L is the way to go if you enjoy spirited driving. In fact, we found ourselves wishing for a bit more oomph with our test vehicle, which came equipped with the 2.5L four banger.

It was perfect for city driving, but when we wanted a bit more performance at highway speeds, we found ourselves wishing for the power and torque the larger engine offers.

If a good-looking sedan with advanced safety systems and a fuel-friendly drivetrain are on the “must have” list for your fleet, make sure to take a closer look at the 2017 Legacy. You’re sure to be impressed.