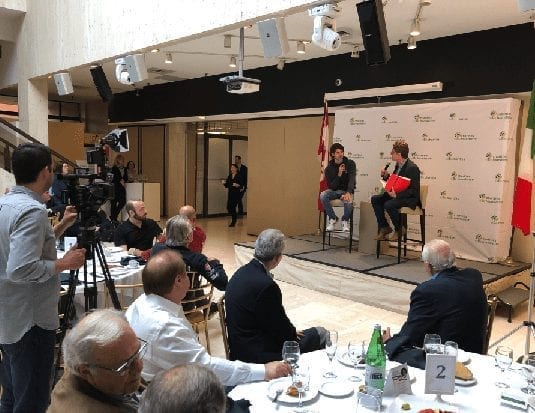 The event, which was attended by guests from across Toronto, including a number of auto dealers —notably former TADA Presidents Sandy Ligouri, Ron Loveys and Frank Romeo, along with TADA Executive Director Todd Bourgon and Consolidated Dealers CEO Tom Langton.

A superb lunch also included the opportunity to purchase raffle tickets for the ultimate Fan Race Experience package. This exclusive prize included two tickets to the Italian Grand Prix in Monza in September, including round trip airfare, one night’s accommodation, tickets to practice, qualifying and the race as well as transportation to and from the track.

Following the lunch, Giovinazzi, who is driving for Alfa Romeo Racing for 2019, alongside veteran driver and former world champion Kimi Raikkonen, talked about his background and obsession with Formula 1 from a very early age, as well as describing what it’s like competing in the highest echelons of motorsport. Giovinazzi took part in a fascinating Q&A session with attendees, signed autographs and took pictures with fans. He was in Toronto prior to competing in his first ever Canadian Grand Prix at the Circuit Giles Villeneuve in Montreal on June 9.

This very special VIP event was put together to support Villa Charities in celebrating Italian heritage, culture and language as well as raising money for the Villa Charities Foundation.