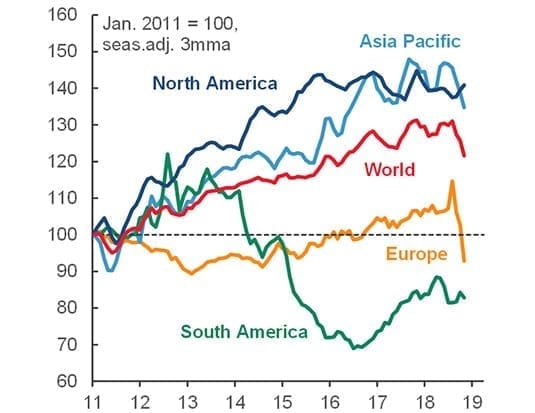 While we’re remaining cautiously optimistic moving into a new year, there is no question that vehicle sales stalled overall around the globe in 2018. During November they declined for a third consecutive month in year-over-year terms, thanks to a steep drop in sales in China, weakening economic conditions in Western Europe, and a slow but steady decline in the United States.

The global drop of seven percent y/y in November brought the year-to-date total sales to the level seen during the same period in 2017. Here in Canada, sales fell to their lowest one-month total since early 2014 in December. However, purchases still posted their second-highest year on record in 2018 with 1.98 million units sold. Throughout 2018, rising fleet vehicle sales offset a bigger decline in consumer purchases.

Over half the decline in 2018 was driven by a steady falling-off in purchase levels in the Western provinces since early in the year and with close to a 10% decline y/y in the Atlantic provinces. In Central Canada, sales went on a relatively slight downward trajectory from the previous year’s record highs. As of November, Quebec deliveries were down by 2.0% y/y, while Ontario marked a slight rise of 0.3%. Overall, we attribute the decline in sales to slowing employment growth and a continuation of the Bank of Canada’s rate-hiking cycle.

A Slight contraction in the U.S. market

The United States enjoyed a four-month streak of strong sales in the final months of 2018, with the strongest December sales figures since 2016. Against forecasts earlier in the year calling for a slight contraction in sales, 2018’s total of 17.2 million units delivered exceeded the previous year’s figures and marked the third-best year on record.

We forecast U.S. vehicle sales to fall from 17.2 million in 2018 to 16.8 million in 2019, owing to moderating employment gains and the rising cost of borrowing. Even though we’re projecting the U.S. economy to continue to expand at a solid, above-potential rate of 2.4% in 2019—aided by late-cycle fiscal stimulus by the Trump administration—we also note that labour markets have approached full employment, and the jobless rate is at its lowest point since the 1960s. Bank lending rates on new vehicles have also edged up to a seven-year high, approaching the five percent mark.

In Mexico, double-digit auto lending rates and, to a lesser degree, broader policy uncertainty continued to discourage auto sales in 2018. Purchases were down 5.4% y/y in November, for a year-to-date decline of 6.7%. Headline inflation slowed from a rate of 6% in 2017 to come closer to the 5% mark in the second half of 2018. But that still led to an erosion in Mexican households’ discretionary spending power, as the growth in wages failed to gain steam ahead of consumer price increases. In December, Banco de Mexico also increased its policy rate again, up by 25 bps to 8.25%, its highest level in decades. We expect a further decline in new-vehicle sales in 2019, as interest rates and these still-high inflation rates price would-be buyers out of showrooms and toward the used car market.

China saw an economic slowdown, brought on by a government-led crackdown on excessive lending and, more recently, the economic uncertainty caused by the U.S. trade tensions. This led to a severe slump in auto sales, dropping 13.9% y/y in November for a total ytd decline of 1.8%. For 2019, we expect only a mild expansion on the back of stimulating economic policies by the Chinese government, along with vehicle penetration that’s still relatively low in smaller, non-coastal urban centres.

A similar year ahead

In Japan, annual sales are expected to expand for the third consecutive year, the first such streak since the mid- 90s, following strong year-on-year increases in the fourth quarter. New-vehicle sales remain low, due in part to an aging population along with subdued economic growth, but the Japanese market has remained steady, with between 3.2 and 3.4 million units sold annually across the post-financial crisis period.

Europe and the UK also saw sluggish growth, although we must take into account the market rebalancing after a hasty dealer clear-out ahead of new emissions standards that took effect in September. We expect flat sales in the region for 2019 due to such factors as the uncertainty of U.S-China trade, Italy’s fiscal troubles, and the rising possibility that “Brexit” will be a hard divorce. All in all, across the globe, we expect that 2019 should play out similarly to the year we just left behind.