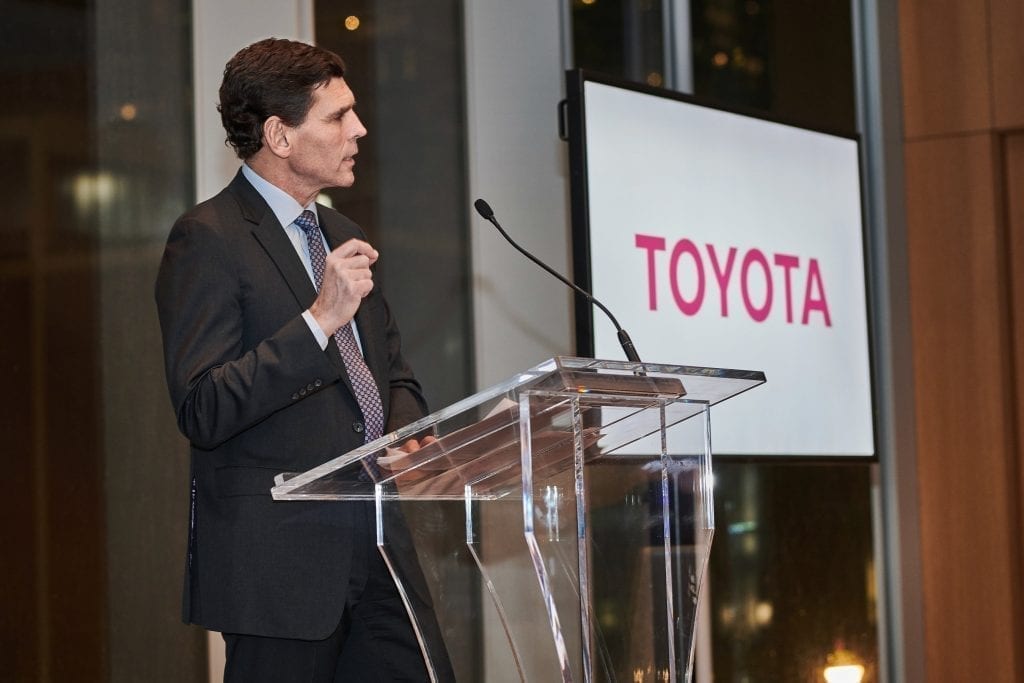 Toyota does not believe in a future where appliance-like pods shuttle humans to their destination.

Key auto executives, along with the media and industry experts, were invited to Toyota Canada’s annual Corporate Dinner, which traditionally takes place just prior to the official opening of the Canadian International Auto Show in Toronto.

Toyota Canada President & CEO, Larry Hutchinson, spoke about the breakneck speed at which the auto industry is changing. “The industry is in flux,” he said, “You see the headlines not weekly… daily … product change, technology, business rationalization, as we try to determine where exactly we’re headed.”

As is the opinion of most industry experts, electrification and the development of the autonomous vehicle are the key technologies driving change. That said, Hutchinson doesn’t believe we’ll see self-driving vehicles on public roads anytime soon. “Fully autonomous vehicles are simply not ready to go mainstream,” he explained. “And they won’t be for a long, long time.”

Electrification, on the other hand, is a key focus for Toyota. “We’re still doing a lot of work to bring a range of great electrified vehicle options to Canadian consumers,” Hutchinson added.

The end of fun

Toyota doesn’t believe in a future where self-driving vehicles will shuttle humans to where they need to go. “That’s not Toyota’s vision,” Hutchinson said. “Not even close. While we do see a role for these types of vehicles, we also know—from decades of experience—people still love to drive, and they love their car.”

Toyota believes that automated technologies shouldn’t replace the human being behind the wheel. “Our technologies are there to help you, but you still make the decisions. You remain in control, “Hutchinson explained. “This is a deliberate decision on our part. Because we know people love to drive. And we know, if someone is engaged in the driving of their vehicle, it’s safer.”

Hutchinson believes that, in the future, cars will be more fun to drive, not less so, and emphasized that Toyota’s recent approach has been to build better, more exciting vehicles for people who love to drive.