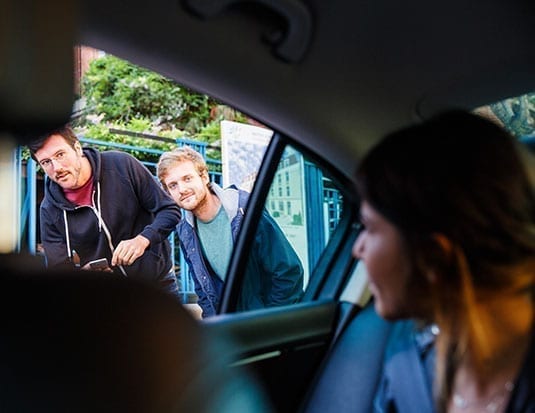 If the sharing economy lasts, how will it impact lenders and lessors?

Like many of you, I have a fairly long drive into work each morning. In some respects, I don’t mind. It gives me quiet time to think, listen to the news, and make a few calls (hands free of course). To be honest, I can’t say every morning I contemplate the growth of the sharing economy, as it has been called, but recently I did just that. By sharing economy, I am referring to the businesses of the world that are embracing the idea of shared assets to generate revenue, such as Uber, Lyft and Airbnb.

So, back to my commute. On a sunny summer morning, I “met” a member of the sharing economy. He was driving much too slow, in the passing lane of one of Toronto’s busiest highways. I tried my best not to get too animated about his lack of highway manners, but then I noticed the car itself.

A few things jumped out at me. First is that it is a new car. I also noticed the top trim, with AWD, too. I knew the model had just launched a few weeks earlier. It was the first one I had seen on the road. My next observation was that he had both an Uber and a Lyft sticker on the rear window of his car. Interesting!

I know there are many people who drive for services like Uber and Lyft on a casual basis and not as a full-time job. However, I wondered if this driver was a full timer and now was driving a brand new vehicle and could potentially drive more than 80,000 km a year as a means of employment? If so, things may not go well, from a cost of ownership perspective.

This particular car really grabbed my interest. I checked the OEM’s website and Mr. Sharing Economy can finance it for 84 months (seven years!) for a very attractive $100 a week, with top trim, and AWD. Deal? Well, it depends on how he uses it.

Most of the assumptions about ownership and depreciation today are based around a consumer driving 20,000 km per year. If this gentleman drives the average amount, his car will have about 180,000 km on it when he pays it off. The car will still be alive, but certainly heading off to the sunset years ahead of its service life.

What if this gent has really bought into the whole sharing economy concept and drives 60,000 km per year? His Uber and Lyft stickers seem to suggest he is at least partially involved in these two enterprises. So when his shiny car is paid off, he will have over 400,000 km on it—if it does make it that far, which I don’t think it will.

You can probably guess that his vehicle will be worth $100 at that point, but only if it has three quarters of a tank of gas in it. Ouch! He will never have any equity in the car, and depending on his luck he might still be paying for it years after it has gone to the big scrap heap in the sky. I assume that he is not leasing the car, which would be another set of nasty circumstances.

Cost of maintenance and parts

In addition to depreciation, the owner of this shiny ride-sharing vehicle is probably looking at four or five sets of tires, and he may be required to have snow tires as well. There are likely over 50 oil changes, 500 car washes, etc. There will also be some major component failures over that time, probably about three or four brake jobs, wheel bearings, and a transmission if he is lucky. I wonder if he has done the math.

If he accidentally writes the car off partway through this seven year loan, he might find he is in a difficult place with respect to his small insurance payout (for an extremely high mileage car!) and the rather large balance remaining on the loan. Given all these costs just to be on the road, I wonder how he will make a living wage. It won’t be easy and likely not a sustainable way to run his little business.

My commuter musings are not meant to be a criticism of Uber and Lyft, but rather a cautionary note to anyone who is thinking of jumping into driving for the sharing economy. Make sure you have done the math and understand the real costs. Furthermore, driving with a brand new car is probably the worst thing you can do. Consider a used car that has been through at least the first 24 months of the greatest deprecation. To avoid maintenance nightmares, do your research into which cars are bulletproof for reliability.

To those of you in the business of financing and leasing cars, I ask: are you fully prepared for Mr. Sharing Economy? Today, most car leases prohibit use for business, but are you protected from risks like this? Perhaps vehicle inspections every 12 months to check the odometer could de-risk the business for you.

Similarly, on loans, the value of the car is the security you have for future payments, but what happens when the value of the asset falls to $0 in a very premature way? Is your risk of default higher on a $15,000 loan when the asset is now only worth a fraction of that amount?

As the sharing economy grows (and if it is sustainable!) I am going to predict that vehicles will need to self report their mileage regularly to the lender or lessor and have tracking technology activated to have financing in place. If enough lenders and lessors are stung by this phenomenon, you can bet that will be the case. Maybe even Big Brother can get this guy to move out of the passing lane.