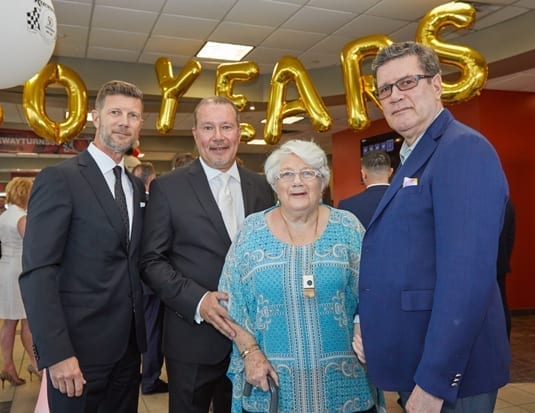 The eventing gathering was well attended with many of the Group’s loyal employees in attendance, along with family, business associates, colleagues and the media.

Susan Gubasta, President and CEO of Mississauga Toyota and President of the TADA (Trillium Automobile Dealers Association), stopped by to congratulate the family on their 50 years of success. In a speech, she said she has known the family since she was two years old. “We grew up together,” she added.

Also in attendance was Joe Orlando, FCA Canada’s Eastern Business Centre Manager. Speaking about Raceway he said, “Their success is built on honesty, hard work, loyalty and perseverance. I have known the family for 30 years, and together we have lived through both good and bad times in this business. But tonight proves that all the hard work and persistence was well worth it. You have made Raceway Chrysler one of the top selling dealerships in Canada.”

To mark this major milestone, Orlando offered the family a memento in behalf of FCA.

“I’m humbled, looking around the room at all the friendly faces who have taken the time to join us to commemorate the people who have contributed to the success over the last 50 years,” Reg Nimeck , President of the Raceway Auto Group said in a speech.

He told the story of how his family first got into the car business, back in 1967. “I remember sitting on the kitchen floor, listening to a conversation that ended up writing the story of the rest of our lives. I knew something important was happening. Although my father kept his composure, I could tell that he was extremely nervous, but also very excited.

“Before I knew it, there were two executives from Chrysler sitting in our living room. And just a few minutes later, my father Ed was secretary treasurer of Raceway.

“At that point in time we were living very modest lives. Our parents were saving money wherever they could. My father getting a job as secretary treasurer of Raceway was a huge deal for our family. It meant we were no longer limited to rice and beans for dinner.”

From the very beginning, Nimeck added, his father’s vision for Raceway was to run a business based on the values of fairness, honesty, and teamwork. “And we’re proud to carry these values to this day,” he added.

“At a milestone such as this I think about my father and what he would say,” Nimeck said. “I wish he could be here to celebrate with us but in 2007 he passed away.”

Nimeck thanked his many loyal employees, adding that he feels like they’re all part of the family. “Having the privilege to build on a business that our father started is something that my brother Gord and I value greatly,” he said.