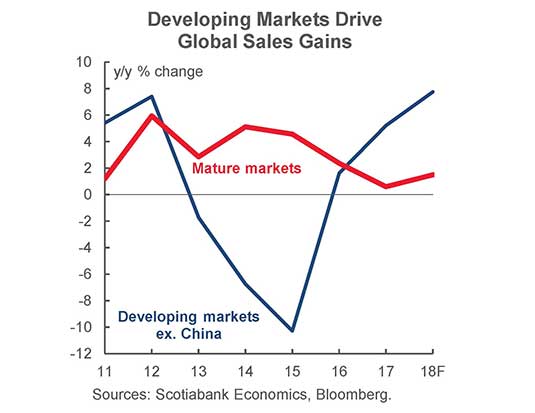 Canadian sales will drop a little this year, but not too far.

Canadian sales rose to a record 2.04 million units in 2017, the first time we’ve ever broken the two-million mark, and that was certainly something to see. It’s unlikely we’ll break that score in 2018, but we’re expecting 2.0 million this year. Even though that’s a drop, it will still be the second-best on record if we do.

It was also a very good year around the globe, with a ninth consecutive sales record worldwide. Previous upturns had generally lasted six to seven years, and we’re expecting this new cycle to extend further this year. We’re seeing improving economic conditions across the entire world, and that says to us that after sales gains of about 2.5 percent globally in 2017, we’re likely to see three percent growth in 2018.

One of the key points in the global auto industry is that when you compare new vehicle sales to the global population, we’re seeing per-capita sales in this decade advance at the fastest pace since the 1950s. Back then, you saw people buying vehicles after the car-starved years of the Second World War, but now we’re seeing it because of the growth in developing markets.

Developing markets are pointing the way
We tend to think of North America and Europe as the areas where most of the auto sales activity occurs, and that’s true to a certain extent, because these regions account for about half of all global sales. But if you look at the growth instead, North America and Western Europe are only accounting for about 20 percent of the sales increases. That’s telling you that the developing markets are really driving the bus here.

Asia will be the growth leader this year, but the bulk of that won’t be from the big player you’re expecting. China accounted for roughly 60 percent of the increase in global sales from the beginning of the economic expansion in 2009 and then through 2016. However, its share then moderated to less than 40 percent last year. This year, we expect to see China’s share further ease to about 30 percent of the overall global increase in 2018. That’s telling you that it’s developing markets, other than China, that are gaining momentum.

Fuel-efficient taxation
Part of China’s slowdown is due to taxation. The country’s economy started to slow in 2015, and so the government reduced the tax that was payable on fuel-efficient vehicles, cutting it from 10 percent to five percent. That led to a double-digit increase in the second half of 2015 and into 2016. The tax moved up to 7.5 percent last year, and this year it will go back to 10 percent, and that has slowed the pace of growth.

The advance we’re seeing in the rest of Asia is tied to its role as an electronics and machinery supplier to the world. Some 70 percent of the world’s semiconductor supply comes from Asia, as does 40 percent of machinery. These two sectors have strengthened significantly over the past year and so production will be ramping up, which is a positive sign for global economic growth. South America is also coming back, and last year’s sales jump of 14 percent reverses three consecutive years of decline. About 60 percent of the continent’s exports are commodities or manufactured resource products, which is double the global average. Commodity prices are on the upswing due to stronger worldwide demand. All of this tells us that auto sales and car dealers globally will have another good year.

Strong growth at home
Here at home, we had a very strong increase last year both in GDP growth and employment. The Canadian economy rose by some 2.9 percent last year, in part reflected by a sharp bounce back in Alberta from the weak activity of the previous two years. We think this year’s growth will be slower, around the order of about 2.3 percent, but that’s still enough to drive sales.

We expect the United States market to climb to 17.4 million this year, thanks to strengthening economic growth, gains in income, and the best vehicle affordability of the past decade— despite the fact that many think sales peaked in 2016 and will drop below 17 million.

However, that viewpoint doesn’t take into account that last year’s sales decline was driven by rental companies buying fewer vehicles, and that’s unlikely to be repeated this year. Roughly 40 percent of the U.S. fleet is now at least 13 years old, and that means more than 100 million vehicles that will be scrapped over the next few years.

Employment growth in Canada, a key driver in auto sales, was close to two percent year-overyear in 2017, the best performance in a decade. We think that will soften to 1.5 percent. We also have to look at the Bank of Canada, which is likely to raise interest rates three times in 2018. That slower GDP and employment growth, coupled with higher lending rates, will reduce sales a little, but we don’t see them dropping significantly. That’s always good news for dealers.