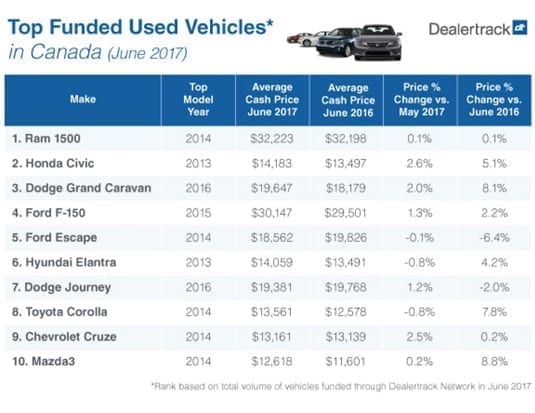 “Supporting the trend that Canadians are migrating from cars to trucks and SUVs—whether new or used—four out of the first five Top Funded Used Vehicles last month were utility vehicles,” said Richard Evans, vice-president and general manager of Dealertrack Canada. “And based on Dealertrack Network data, overall month-to-month Top Funded Used Vehicle average cash prices in June were relatively stable.”

The monthly Top 10 Funded Used Vehicles report is just one example of the type of data and insights the Dealertrack Canada Network can provide. Clients can also opt to configure specific reporting to suit their needs, with data extracted from Dealertrack Canada’s database.