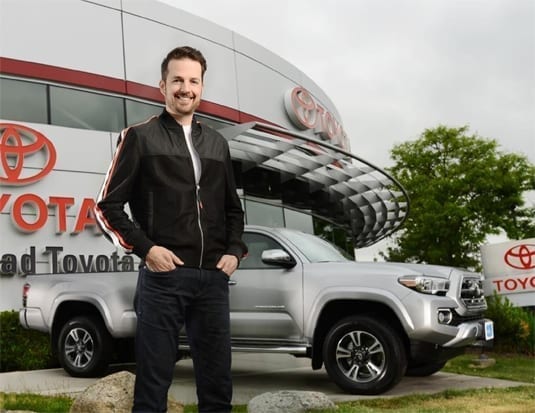 The OpenRoad Auto Group has partnered with Todd Talbot, the co-host of Love It or List It Vancouver, to produce a series of videos profiling Talbot and his new Toyota Tacoma as part of a social media campaign.

“You couldn’t get a better or more genuine spokesperson for your brand,” said Christian Chia, President & CEO of OpenRoad Auto Group. “Todd has been a long time customer of ours at MINI Yaletown, so we’re delighted to extend our relationship in this way to showcase his personal side and demonstrate how his OpenRoad vehicle fits into his lifestyle.”

The first video is titled “73 Questions with Todd Talbot” which features Talbot walking through OpenRoad Toyota Richmond while answering rapid fire questions and performing celebrity impressions and showing off his dance moves. OpenRoad will release a second video showcasing Talbot in the Toyota Tacoma later this month, followed by another series featuring another vehicle in early 2018.

The partnership between OpenRoad and Talbot also includes his work as an emcee at OpenRoad’s annual charity golf tournament and social media posts from Talbot directly.

“Like most people, I’m really busy between working, moving, renovating, and being a dad, so the Tacoma plays a big role in my daily routine,” said Talbot. “I look forward to sharing a glimpse behind-the-scenes, and I hope our friends on social media will come along for the ride!”