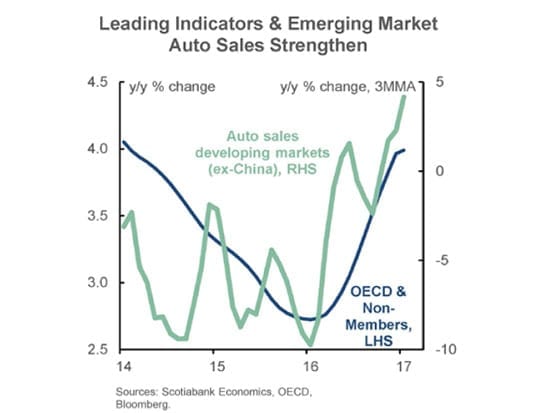 A strong global market continues to bring good news to the auto industry, and things are possibly even better than we were expecting. Better yet, here in Canada, the numbers continue to remain at record highs, driven primarily by the luxury markets.

Last year’s increase in global sales was, in large part, driven by the surge in China. We were expecting to see some slowdown this year because of that country’s increase on the sales tax applicable to small vehicles with an engine size of 1.6-litre or less, and there was some uncertainty as to whether other countries would step up and make up the difference. Based on the numbers from the first months of the year, we are indeed seeing that significant acceleration in other markets.

We haven’t changed our forecast as of yet, but if the momentum continues to build, we may have to do that. We had forecast a global increase of about one percent, but the January gain was three percent, which was considerably stronger than we were projecting.

Hot luxury markets
Data gathered for February indicated ongoing strength in North America, with Canadian purchases remaining above an annualized two million units for the second consecutive month and rising to a record high for February. As mentioned, that was led by a 16 percent year-over-year surge in luxury volumes, both in cars and trucks. The Canadian luxury market has heated up in recent months and has accounted for nearly 60 percent of the year-to-date increase in overall volumes in Canada this year, which is five times its normal share.

The bulk of these luxury sales are in British Columbia, where they surged nearly 25 percent, and in Ontario, where they rose by 15 percent. We expect these growth rates to moderate as economic activity softens in these provinces, but the luxury market will continue to be buoyed by robust gains in household wealth. The Canadian economy overall will continue to gain some momentum. Growth last year remained fairly modest because of the continued impact of the downturn in the oil and gas sector, but we are seeing that turning around. Alberta and Saskatchewan, in particular, are moving up on a year-over-year basis for the first time in a while.

We had forecast a global increase of about one percent, but the January gain was three percent which was considerably stronger than we were projecting.

The Scotiabank Commodity Price Index shows that the commodities Canada produces are up close to 30 percent on a yearover- year basis. That’s a positive sign for the parts of Canada that are primarily driven by the resource sector, and it clearly highlights an improvement that’s going on for those products. While the luxury brands counted for the rise in numbers, mainstream-brand dealers may also benefit, as that increased household wealth allows buyers to opt for higher trim levels and more features when they purchase in all segments.

Slumping fleet purchases
South of the border, car and light truck sales came to an annualized 17.5 million units in February. That stayed in line with the previous month’s performance, as well as the full-year 2016 total, even though fleet volumes have weakened, with the Detroit automakers reporting a cumulative 14 percent slump in fleet year-over-year in the opening months of 2017.

While many analysts are overly cautious for the U.S. outlook, favourable industry fundamentals are prompting automakers to ramp up North American schedules. The latest industry production schedule points to a record output of an annualized 18.7 million vehicles in the second quarter. That’s up from 17.3 million in January, when the industry was reducing its bloated sedan inventories. We estimate that rising vehicle assemblies will add an annualized 0.6 percentage points to the economic growth in the period from April to June. While overall U.S. growth was 1.6 percent in 2016, we expect this to lift it 2.3 percent in 2017.

Driving the markets
Globally, Asia has become the key driver of the auto market in recent years. And even when China is taken out of the equation, sales in the rest of the region rose four percent year-over-year in January, more than double the advance in all of 2016.

The South American market is also on more solid footing, climbing by four percent and led by double-digit advances in Peru. Higher commodity prices and some improvement in labour markets are factors, especially since commodities and resource-based manufacturing account for nearly 70 percent of South America’s exports, which is double the global average.

Eastern Europe led the emerging market rebound in January, with double-digit sales gains among many new European Union members and an end to the downturn we saw in Russia.

When we look at most of the indicators that we track on a global basis, they are on an upward trend. Most are strengthening, which is telling us that economic activity, in general, is somewhat stronger than what most people were expecting. It’s much broader than just auto sales, and that’s definitely positive in terms of the Canadian economy overall, and then in terms of the automotive industry. The recovery has been gaining momentum for some time, and this significant acceleration is pointing to another record year for global auto sales ahead.