Ontario MPP Gets Bill Back on Track 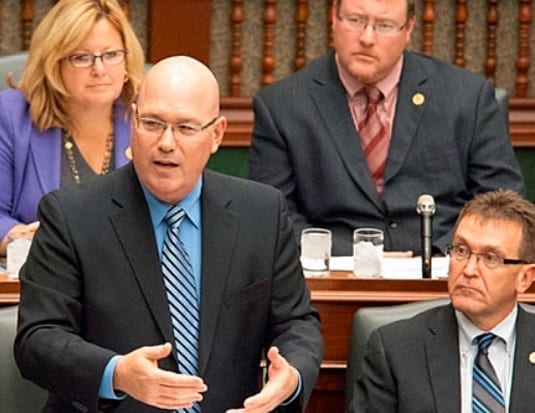 Prorogation put in-dealership licensing Bill back to square one, but MPP Clark re-introduced it the first day back.

Ontario Premier Kathleen Wynne’s decision to start a brand new session of Parliament – by proroguing the Legislature – prevented The Cutting Red Tape for Motor Vehicle Dealers Act from moving forward. Proroguing Parliament means all Bills are wiped clean and must be re-introduced when a new parliamentary session begins.

Last December, the Bill passed second reading with unanimous support from all three political parties, and was one reading away from becoming law.

Leeds-Grenville MPP Steve Clark re-introduced the Cutting Red Tape for Motor Vehicle Dealers Act, 2016 on September 13. It was the first Private Members Bill to be tabled in the new parliamentary session.

If passed, it would allow auto dealers the option to register and license the vehicles they sell through an online portal, from their dealership,  and eliminate the need to physically visit Service Ontario upon completion of a sale.

“The Trillium Automobile Dealers Association deeply appreciates MPP Steve Clark’s lightning quick action to re-introduce his Cutting Red Tape for Motor Vehicle Dealers Act,” said Frank Notte, Director of Government Relations for the Trillium Automobile Dealers Association. “After unnecessarily putting the Bill into reverse, we hope the Wynne Government will place Bill 3 in the fast lane and make it law without delay. It’s frustrating that a Bill  which received all-party support has to start all over again from the beginning of the long and slow road to becoming law.”