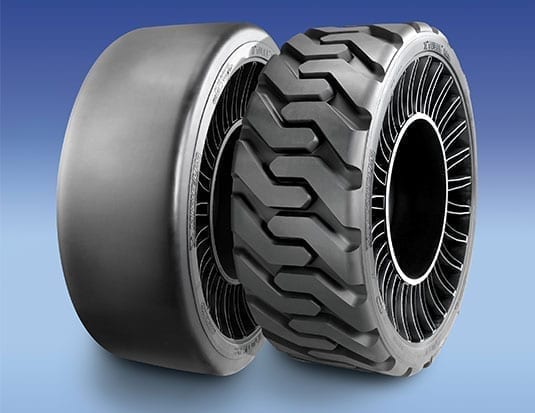 Both the all-terrain (AT) and hard-surface (HST) versions have been available in Canada and the U.S. since August 1. According to the company, this is Michelin’s first embedded 8-bolt hub that is interlocked mechanically for better durability.

An internal drum endurance test comparing the MICHELIN X Tweel SSL and the MICHELIN X Tweel SSL 2 has shown that the shear beam construction on the latest version is better and helps maximize core life. Additionally, a third-party test comparing the crack growth rate of the SSL and SSL 2 tires show that the new spoke formulation on the current version improves spoke life by 10 times. The TWEEL SSL 2 tire can withstand a load of up to 4,400 pounds (1995 kg).

According to Michelin, the advantages of using TWEEL are—”no maintenance, no compromise and no downtime”. Since the tire requires no air removing the risk of getting a flat tire, the X TWEEL SSL is designed to enable users stay in operation longer with lower downtime for higher profitability. Michelin explains that the tire has been engineered for easy mounting and damage resistance. Additionally, it provides comfort to the vehicle operator and reduces fatigue. The company notes that the tire aids in higher productivity and longer wear life when compared with other standard pneumatic tires.