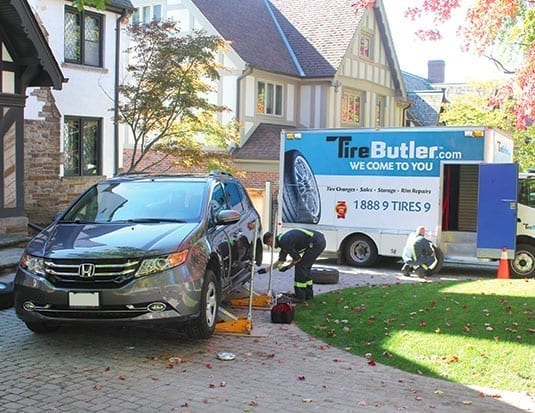 Tire Butler is a mobile tire repair and replacement service that employs a crew of highly trained and certified technicians to change customers’ tires at home or at the office. More than that, though, Tire Butler also provides tire storage in the Toronto area, along with mobile rim repairs, sales of tires and wheels, hitch installations—like ski racks, bicycle racks, and cargo boxes—and competitive pricing on leading tire brands, including Michelin, Pirelli, Continental, and Bridgestone. The company is an approved Tesla Mobile Service Supplier and is the first of its kind in Canada to offer services via Amazon.

With over 30,000 luxury and family automobiles served, the company has garnered a reputation as “Toronto’s most trusted mobile tire service.” It is a four-time Consumers Choice Award winner, a Best Automotive Tire Service winner, and a part of the RBC Drive Program.

“I learned this business through mentors who taught me to take your time, build a good reputation, and build a good relationship with your customers. You may not always have the cheapest prices, and you may not always have what they need, but if you build a good relationship with your customers, they’ll always support you. And if you do that in a really structured fashion, you can really build a successful business over time. I want Tire Butler to be here long after I’m gone,” says Jack Benzacar, Founder and CEO (Head Butler), Tire Butler.

Benzacar formerly worked as an executive for a company called Electra Group International, in Treadway Exports, which is one of the largest independent tire dealers in the world. He lived overseas running a division of it for a while before returning to Canada with his wife.

“[We] bought a place in downtown Toronto and I needed tires for my car,” Benzacar says. “Real estate had overtaken all the little garages that were in downtown Toronto, and I found myself having to go outside of the city to go get tires. I thought, this is ridiculous. This was about ten years ago, and I remember thinking, ‘I wish somebody could just come to me and do this.’ That was the genesis of the idea. It was [figuring out] how to save time in this world. It would take three hours to get a set of tires put on, and I was able to turn it into something that took no more than ten minutes of your time.”

Afterwards, Benzacar opened a bricks and mortar garage and a small store, during which time he verbally verified with friends and customers whether they would be willing to pay a premium for mobile tire services.

“We then sort of saw that there was demand for it in the industry, and it became a logistics business,” he adds. “It became all about how to get trucks around on time in the busiest city in North America when you have a demand from thousands of people wanting tires at the same time, like in winter. Once we got that figured out, word of mouth started to grow the business,” he says.

The business started in 2010 and eventually became fully mobile in 2011, with the first few years spent on figuring out issues and developing the business in stages. The early phase was determining information about cars, the right products, the right computer systems, and how to get around the city efficiently. The second stage was considering how to grow the business, which specific areas to target in the city, and the best methods and practices for continuous growth. The third and current stage is focusing on how to automate the service. Presently, customers can go online and book an appointment without calling or talking to a person at the company.

Benzacar adds, “We got to the point where we built our own scheduling system that allows us to go across North America now. Every minute saved on the truck is the ability to get another customer.”

Despite its rapid growth, the company spends only around $600 on advertising a year and relies heavily on word-of-mouth marketing, according to Benzacar. “I’m not selling a widget. I’m selling a service. So, let’s say I do marketing, and you saw the [ads] and decided to use the service. Well, you’d be really upset if I couldn’t provide that service in a timely fashion,” Benzacar explains.

Nevertheless, Tire Butler has secured a five-star rating with hundreds of reviews on Google, with phenomenal feedback.

“We have a 92% customer retention rate. We lose customers to divorce and death, and that’s literally it. We’re a little bit cheaper than a dealership, but we are more expensive than your discount garages that are around. We’re selling time. What are three hours of your time worth?” he asks.

The business did come across several challenges on its road to success. For instance, there were multiple questions that needed to be considered at each stage of the company’s growth:

1) Did the clients share the correct information about the car to determine which tires they would need?

2) How do you find excellent staff that can work independently, can handle problem-solving on their own and can take pride in the work they do?

3) How do you get around the city efficiently?

4) Are there any other issues with the car, and how would you approach the client about them before changing the tires?

And as the company grew, the questions began to change to:

1) How do you scale this properly?

2) How do you keep replicating what you’re doing?

3) How do you gain new customers without sacrificing the ones that gave you your foundation?

4) How do you continue to provide exceptional customer service?

To address these issues, Benzacar says that he prefers to take his time to build the service slowly and methodically.

“I love baseball, and everybody talks about the home run. But in baseball, it’s the singles that win games. Home runs don’t win games,” he explains. “And it’s hard making people understand that, especially in the business world. Everybody in this world wants everything quick; nobody wants to wait.”

For now, the service is only available in Toronto and the Greater Toronto Area, but Benzacar believes that the service is ready for significant growth and hopes to expand across Canada and the United States. Benzacar also states that his staff—both technicians and the back-end office staff—are his number one asset, as they have contributed to the success and consistent growth of the company over the years. He originally started with Toronto because he believes that this is the hardest city in North American to deal with, due to weather, traffic congestion, and people who value time the most.

“Once we’ve mastered Toronto, we believe there’s not a city in the world where we couldn’t succeed,” he adds. “I very much believe that you have to crawl before you walk and walk before you run. And that’s the way my business model is; I’m building a business for all time, not just for a moment.”