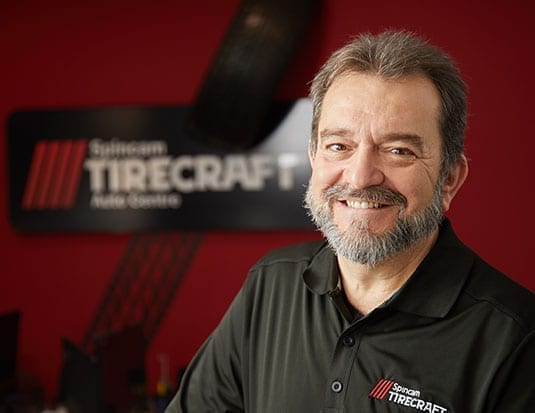 In a grocery store, attractive displays can encourage customers to buy more food. Cam Campli, owner of Spincam Tirecraft in Richmond Hill, Ontario, took that knowledge with him into tires.

“I got into tires twelve years ago,” Campli said. “I started with another company as a franchisee. I’d been in the food industry since I was 18 years old, and I applied my knowledge of supermarket displays to tires. We were the top franchisee in Canada, and it was due to the way we had our tires outside the shop.”

Campli switched to Tirecraft last October. “There’s no franchise fee, and it’s a Canadian company that understands the Canadian marketplace, which the other company didn’t. And the buying power we have with tires is greater.”

His last venture originally specialized in car care, and then looked at tires. “A lot of stores weren’t taking advantage of such a quick, high-profit-margin item, and it’s an easier sell than a lot of things,” Campli says. “People are always looking for oil changes and tires, and they go hand-in-hand. We still do repairs and maintenance, but about 30% of our business is tires and I’m trying to increase that.

“I was selling more offshore brands before, and we were doing well with those, but many people want name brands and now I’m on both sides. With the better buying power at Tirecraft, we can compete with Costco and Canadian Tire to keep our prices lower.”

Spincam Tire craft fronts onto Yonge Street, the major thoroughfare in the area, which provides great visibility and a lot of walk-ins. “We’re still doing the displays. We’re in the process of creating a roll-out for 40 or so rims that we’ll put out right near the street. When people drive by, that’ll get across the fact that we sell both rims and tires.”

His store comprises four bays and eight people. “It’s all about our customer service and the way we present things to people. We give them options. My mechanics are paid by the job, not by the hour, and there’s no incentive on sales.

“If somebody’s got three millimetres on their brakes, we’ll tell them it’s recommended they get new ones, but they can go another two months. Some will say, ‘I appreciate it, I can’t afford it right now, but I’ll come back,’ and others say, ‘I’m here now, do it.’ We have succeeded because of our honesty.”

Campli had five locations under his old franchise, which he gradually whittled down to the current one in 2017. “I’m planning on growing again within Tirecraft. My son is in the industry on the parts and sales side, and I’m trying to pave the way for him. I have a really good team here with three or four people interested in running their own shops, and I’m planning on making them partners. I want to grow with the people I have now.”

From dealing with people who love to eat, he’s now selling what’s basically a grudge purchase for most, but he knows how to make it work. “You’d have to be in our shop to see how we make it better. We have a good rapport with our customers, and a lot of them are like family. Automotive has always been a passion of mine.”