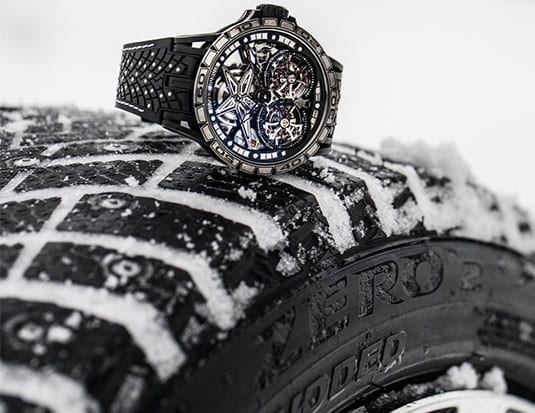 The Excalibur Pirelli ICE ZERO 2 is set to debut at the same time as its tire counterpart at the Pirelli proving ground in Flurheden, in Swedish Lapland.

The designer watch is a part of an iconic collection developed by Roger Dubuis with Pirelli Design, featuring its established sports styling and signature skeleton calibre. The watch’s double skeleton flying tourbillon is one of the world’s highest complications in the realm of Haute Horlogerie. Additionally, it is powered by the RD105SQ Calibre, certified by Poinçon de Genève.

Only eight limited edition pieces of the Excalibur Pirelli ICE ZERO 2 have been made. Its strap features the same studded pattern that characterizes its tire counterpart. The studs, made of steel in the watch and aluminum in Pirelli’s tires, make up the most distinguishing feature of both the tire and the watch. They are added to the tire as the most effective solution to “grip” even icy road surfaces where rubber fails to find a good grip. In a move to maximize safety and simultaneously improve driving satisfaction in adverse conditions, Pirelli has increased the number of studs on the tread of the Ice Zero 2 from the first-generation 130 to its current 190.

The tracks created by the stud distribution on the tire is the primary source of inspiration behind the new Excalibur watch. As with all the straps on limited edition Pirelli watches, the Excalibur Pirelli ICE ZERO 2 features rubber inlay sourced from P Zero tires that took part and won the major motorsports races where Pirelli is the sole supplier.

The partnership between Pirelli and Roger Dubuis started in 2017 and continues with the creation of this new watch model. In a release by the company, Pirelli says that this partnership stands out for its exclusiveness, technical skills and the most innovative materials, as well as the shared focus on styling and the approach taken by both concerns towards research and development.