Grandview Tire and Auto Centre: Keeping Up With Change 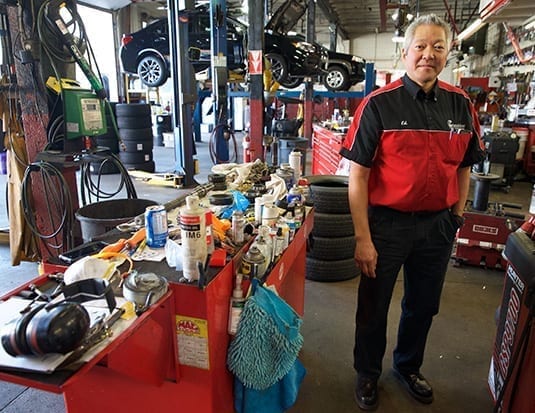 This Vancouver shop has enjoyed 24 years of success, and is looking forward to many more.

Vancouver’s Commercial Drive neighbourhood has changed a lot since 1994. That was the year John Chilton and his wife bought Grandview Tire and Auto Centre. The business continues to thrive beyond a generation of ups and downs, a fact Chilton attributes to service, ethics, and a love of cars.

A true blue car guy, in his spare time Chilton gives love to his 1988 Camaro IROC-Z (Former Players GM Series) as well as a restoration job on a 1981 Malibu with his son Ryan.

Chilton started in the business out of high school, working in speed equipment. He wanted more full time work and ended up with Uniroyal in K-Mart, before moving to tire sales at Sears, where he became a mechanic.

He moved into tires for good in 1983 with a 10-bay Firestone shop in Burnaby, B.C. “I liked the thing,” he says. In 1994, Firestone offered him a struggling shop on Commercial Drive. Today, Grandview Tire is the only remaining Firestone shop in the city.

“A lot of change over that time,” he says. “We used to sell a customer new tires every one or two years. Then it became every three or four, and with radials every five to seven years. We see a lot more product coming out of Asia. And there’s competition from the online sellers. Pricing has come down.”

It’s fair to say that with changes in the competitive landscape, running a successful independent tire shop is certainly not without its challenges.

Perhaps one of the reasons the shop continues to thrive is that Grandview has stuck to its strengths. “We have always started with quality and tried to show customers the benefits of a better quality tire,” Chilton adds. “These days, everybody has tires. We have the car dealers, the big box stores, and the (aftermarket) shops of the world who will put anything on anything.”

As for the online sellers, Chilton says he just can’t compete when it comes to price. “But who is going to service these tires?” he asks customers. “Who is going to do the warranty work?

“We’re tied into ALLDATA and other sources so we stay up to the moment with all of the commercial and technical details, so we can provide customers with reliable advice,” Chilton notes. Over the years, Grandview has been committed to training, mainly through online courses, these days. “So we’re aware of changes coming along,” he declares.

On the marketing front, Grandview has leveraged its reputation through social media. “It has played a big role in keeping us up there. We do service reminders through MechanicNet in Canada. People know who we are,” he says.

Looking ahead, he sees inventory as a major challenge. “The range of sizes has exploded. Used to be we had tires for every car. But now there’s a huge variety to stock,” he states.

As well as sizing and inventory issues, Chilton wonders about the impact of autonomous vehicles on the market. But keeping up with change seems to be the hallmark of Grandview Tire and Auto Centre.

At 70 years of age, Chilton is in the process of turning the business over to the next generation, who will certainly rely on Chilton’s vision and values to keep the winning record going forward.