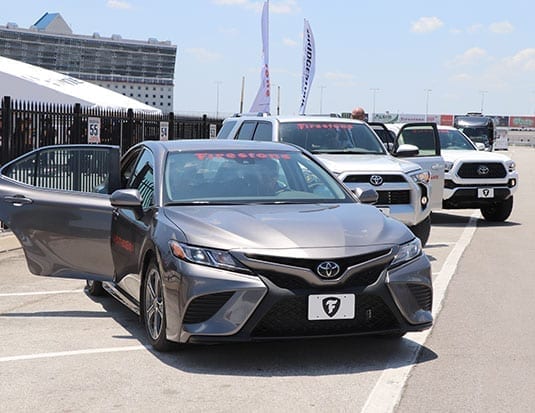 Bridgestone is launching the new Blizzak WS90 winter tire, which replaces the popular WS80 in the Canadian market.

The launch of the new passenger vehicle tire took place on January 18th in scenic Steamboat Springs, Colorado, where Bridgestone has its own winter driving school. Automotive journalists were invited to test the new Blizzak tires in real-world winter conditions in the Rocky Mountain foothills.

This latest edition to the Bridgestone winter tire catalogue was engineered for the sedan and minivan markets. It showcases the latest and greatest in winter tire technology, which offers increased handling, control and durability.

The media launch included a test circuit on the local indoor ice rink. Acceleration was similar for both vehicles, while the braking distance was significantly shorter on the vehicle mounted with the new Blizzak tires. Bridgestone reports 15% shorter braking distances, while our ice rink experience produced results more in the 30% range.

The Bridgestone team closed out this topic by comparing results of the new WS90 against a popular all-season tire, which clearly illustrated that these tires are completely inadequate for icy driving conditions. The ABS brakes on the all-season tire test vehicle worked overtime to avoid crashing the vehicle into the boards.

As Bridgestone Americas Tire Product Strategy Director Robert Saul explained, “Each second counts when you’re trying to brake on icy or snowy roads or in poor visibility situations. The advanced technology used in the construction of the Blizzak WS90 positions us as the leaders in vehicle control and adherence in the worst possible road conditions.”

Other noteworthy improvements to the newest member of the Blizzak line of winter tires is the redesigned tread pattern, which prolongs the tire’s life. According to Bridgestone, in comparison to the Blizzak WS80, on average, this latest innovation should offer an extra season of winter use, bringing the total to four.

A fair portion of the launch day was dedicated to testing the new Blizzak tires in the real-world conditions of the Bridgestone winter driving school. The test centre, which first opened 35 years ago, is made up of a series of snowy circuits, including several slopes of varying grades. Experienced professional drivers accompanied journalists as they drove comparable Toyota Camrys and 4Runners equipped with the new WS90 and competing brands on the snowy circuits. The SUVs, which were used only for braking performance comparisons, were equipped with previous-generation Blizzak tires.

Testing included emergency braking control, manoeuvrability in sharp corners and regaining traction after loss of control in understeering and oversteering situations. The technology used in the new tread design proved its efficiency in both sharp cornering and acceleration testing.

“The challenge was to develop a tire capable of retaining its flexibility for maximum adherence in cold weather while increasing the rigidity of the tread surface for increased durability,” explained Bridgestone Product Manager, Will Robbins. “While we can’t say that these new features constitute a revolution for the Blizzak line, it remains a significant evolution which will be much appreciated by Canadian drivers. While the product was developed for the Global market, the prototype was tested and approved right here, in our Steamboat Springs, Colorado test facility.”

The Blizzak WS90 is available in 51 fitments, which covers 86% of the sedan and minivan market on the road today. Tire retailers should receive their first shipments starting in May.