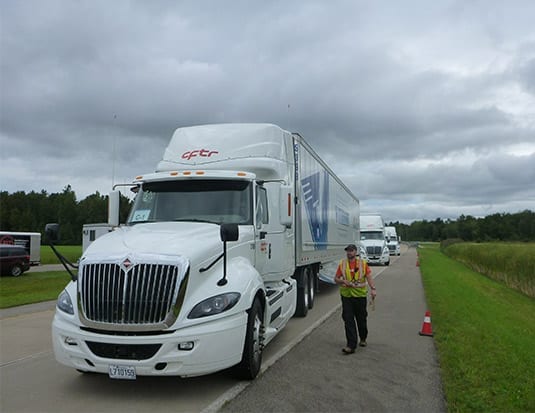 The PIT Group followed the TMC Fuel Consumption Test Procedure—Type III, RP 1103A. They conducted two separate comparison tests on steer, drive, and trailer tires run on three tractors and trailers with identical specs. One was a line haul test and the other a regional haul test. A tractor-trailer combination was mounted with a complete set of steer, drive and trailer tires from each manufacturer for each test.

The tires, along with the tractors, trailers and drivers were switched around during a series of tests to eliminate the influence of any vehicle difference or driver difference on the test results.

Using the same methodology, the regional test was conducted with tires designed for regional applications. Double Coin’s RT606+, RLB1 and RR150 tires featured in the regional test. Continental’s Hybrid HS3, HDR2 Eco Plus and HT3 tires were used in this test. The three Michelin tires tested were the XZE2, XDN2, and the XZE2.

“We are pleased with the results of this independent study,” says Tim Phillips, Vice President of Marketing and Operations for Double Coin. “We wanted to go head-to-head with top-tier brands in order to prove that Double Coin tires are quality-engineered tire products that also deliver superior performance and exceptional value—more than is sometimes perceived in the marketplace. The fact that our steer, drive and trailer tires are as fuel efficient as more well-known brands and are backed by a 7-year, 3-retread warranty means that our customers can be confident in quality tires that deliver an ongoing lower cost per mile throughout the life of the tire.  These results validate what we have known for some time and what the rest of the transportation industry now knows as well.”