“Smart” Tires: The Key to Autonomy 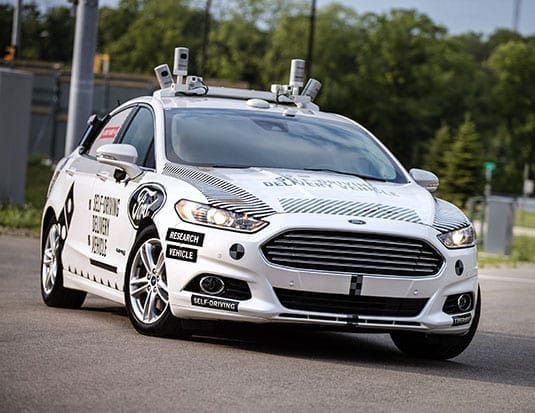 Self-driving vehicles will only be as good as their tires.

The most important safety feature on any vehicle is good tires, with sufficient tread and at the right pressure, but they’re about to become even more important. As automakers get closer to the goal of fully autonomous self-driving vehicles, tires will have to get smarter as well.

A vehicle capable of all driving functions, and one that might not even have a steering wheel, will require information that today’s tires are not yet capable of providing. It’s the key most consumers never consider when they wonder how close we are to letting the car do all the work.

Self-driving vehicles are evaluated on a series of levels from zero to five, with zero having the driver in control of all functions. Some vehicles available today are capable of operating at Level 2 or even Level 3 autonomy, meaning they can accelerate and decelerate on their own, and maintain their place on the road.

They manage this by reacting to what’s around them. Their adaptive cruise control maintains a pre-set distance to traffic in front; they will brake if that vehicle ahead stops, or if a cyclist or pedestrian crosses in front of them; and they are able to detect lane markings and stay in the centre of the lane.

Fully autonomous vehicles will require considerably more than that: rather than reactive, they will have to be proactive. They’ll need GPS positioning that’s accurate within centimetres to make turns or get off at highway exits; they’ll need to communicate with each other and with infrastructure such as “smart” traffic lights and parking garages; and they’ll need to anticipate issues, such as pedestrians approaching the roadway.

Can’t stop if there’s no grip

All of that requires accurate algorithms, and these in turn will depend on the tires. The vehicle’s computer knows where it’s supposed to stop, or where it should start making its turn, but if the tires are worn or are on a slippery surface, stopping distances will increase—and that could potentially mean the difference between hitting or missing a pedestrian.

It’s also an issue on the current level of auto-driving cars on adaptive cruise control, but since drivers spend the majority of their time in full control, they will (or at least they should) notice when worn tread makes stopping more difficult, or will likely turn off the automatic systems when traction is poor. On a Level 5 autonomous system, the vehicle itself will have to know.

Of course, just as auto companies are working on the issues, so are tire manufacturers. These include Pirelli, which had previously announced its Cyber Tire that uses an autonomous electronic sensor to determine road conditions, available grip, and the possibility of sliding or hydroplaning, the tire’s footprint and angle, and how worn it is. Earlier this year, the Italian company unveiled a corresponding technology that could send the tire’s information to an app on the driver’s phone.

Michelin’s concept Vision Tire, which uses airless alveolar construction and tread that can be 3D printed while the tire is still on the vehicle, is also designed to be able to transmit its conditions.

Tires have always been the most important safety feature, and now, as automakers introduce self-driving vehicles in the name of preventing collisions, well-maintained tires are going to be even more essential than they’ve ever been in the past.