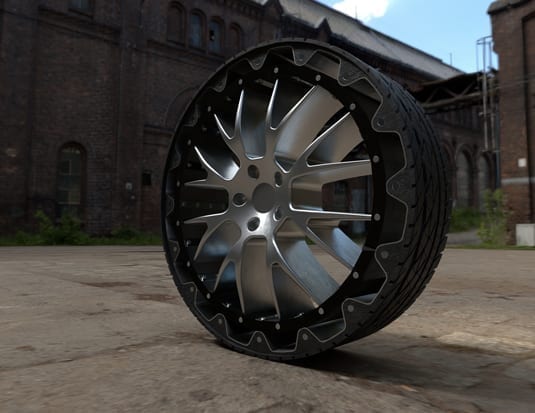 A new Canadian player may soon be entering the airless tire race: Autovector, headed by Elias Assad, is presenting its latest airless tire prototype at the Reifen tire industry fair, which is being held in conjunction with Automechanika Frankfurt, the world’s leading automotive service industry tradeshow.

The prototype, presented back in 2014, has evolved into a practical application which the company is seeking to commercialize.

The airless tire’s Active Belt is made of advanced abrasion-resistant polyurethane, which at this stage of development can bear loads of over 500 kg.

As the technology continues to evolve, the tire’s capacity to eliminate vibrations would make it an ideal option for high-performance vehicles, a characteristic which has yet to be mastered by tire-industry stalwarts, explains Elias Assad.

“The elastomer spokes in the majority of airless tires in the market have to work both in compression and in tension, requiring a contradictory, if not impossible combination of stiffness and resilience,” points-out the CEO of this small start-up.

“The load-bearing solution applied to our product positions the elastomer spokes in the longitudinal direction,” he proclaims. “Positioned such, the spokes act as beams both between the rim spokes and the rigid spokes formed in the outer hoop.”

“The spoke design allows the beams to carry the load in tension at all times, a simple solution which eliminates the inherent stress present in airless tires produced by the leading tire manufacturers,” claims Elias Assad. This design also provides superior cushioning and ride comfort.

In preparation for the eventual marketing of the product, its developers should be ready to embark on the first steps shortly. “We’ve developed a practical application, and we are ready to begin feasibility testing,” confirms Elias Assad. “Solutions include co-branding with an established manufacturer, or we might choose the independent route.”

“At this point, the industry leaders have marketed off-road applications such as golf carts, lawnmowers, etc. Others have chosen the bicycle tire market, which could be a viable choice for our first marketing foray,” he concludes. “This is a very realistic project, which we are actually executing.”