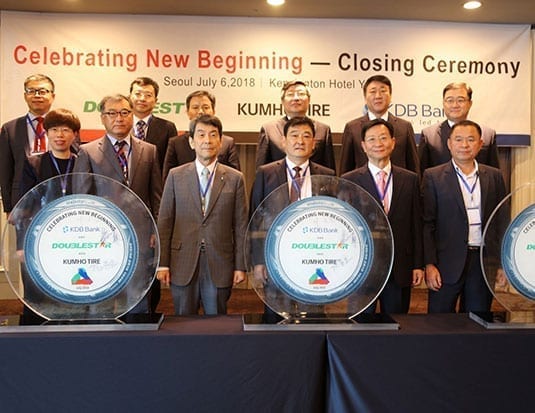 Doublestar Group has announced that it has completed an agreement with South Korea’s Korea Development Bank (KDB) to acquire a 45 percent stake in Kumho Tire for RMB 3.9 billion. By this, Doublestar becomes Kumho Tire’s controlling shareholder, while KDB and other Kumho creditors will remain the second largest shareholder with a 23% stake.

With a history of 58 years, Kumho Tire is the second largest tire company in South Korea. It has eight factories and five research and development centers around the world. Its car tires are known for “fashion”, “sports” and “fuel economy”, and are used by leading car makers in the world.

Doublestar is known as a leading “intelligent manufacturer” of tires in China. It is the only company in the world that owns both an “Industry 4.0” factory for commercial tires and an “Industry 4.0” factory for passenger tires. Doublestar has been ranked number one among Chinese tire companies in the “Asian Brand 500” list for three consecutive years by the “World Brand Lab”.

According to Doublestar Chairman Chai Yongsen, “Kumho Tire’s strengths are in PCR (passenger car radial) tires while Doublestar’s strengths are in TBR (truck and bus radial) tires. I believe that the synergy and integration of our two companies will produce a multiplier effect. Through products, technology, manufacturing, and services that represent the future of the global tire industry, we will become one of the world’s greatest tire companies.