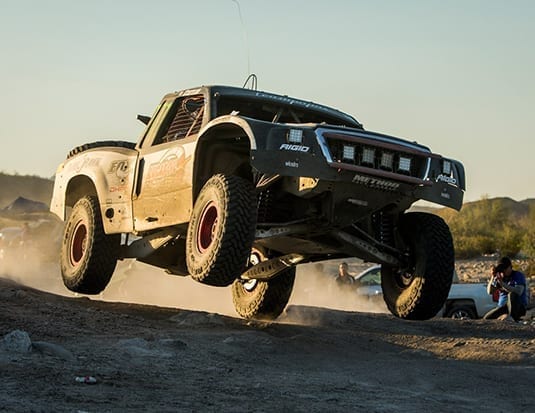 Kyle LeDuc and Toyo Tires won Round 4 of the Pro 4 Class in the Lucas Oil Off Road Racing Series at the Lucas Oil Speedway in Wheatland, MO.

The off-road course at the Lucas Oil Speedway is 1.2-miles in length and has nine turns, including an “over and under.”  It is considered the longest track on the circuit and challenges drivers with a combination of clay and dirt.

“The track in Missouri is very demanding.  We brought a new truck this year and man did it pay off,” said LeDuc.  “We had fast laps, a top qualifier and a race win… all made possible by the rubber hitting the road.  Our Toyo tires took us to victory… our 73rd win in Pro 4.  All on Toyo Tires.”

“We congratulate Kyle on winning the Pro 4 class on Saturday at the Lucas Oil Speedway,” said Stan Chen, senior manager of events and sponsorships, Toyo Tire U.S.A. Corp.  “Congratulations are also in order for Brandon Arthur for finishing second in Pro Lite during Round 4 and to Jerett Brooks for finishing second in Pro 2 during Round 5.  It is great to see Team Toyo on the podium in all of the pro classes.”

Kyle LeDuc and Toyo Tires have won five Pro 4 Class championships in the Lucas Oil Off Road Racing Series since 2012.  His last four championships were consecutive through 2017.

The 12-race Lucas Oil Off Road Racing Series can be seen on CBS, CBS Sports Network and MAV TV.  Log on to lucasoiloffroad.com for race highlights and for schedules of television coverage.