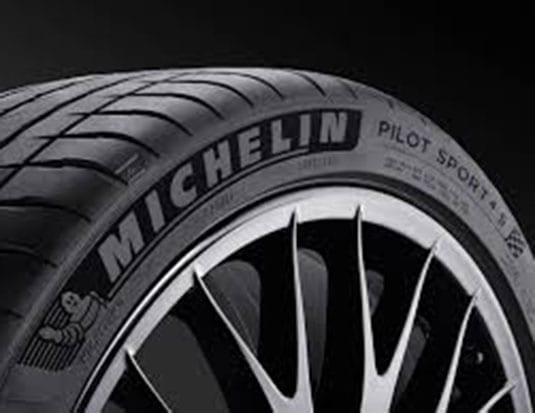 Group Michelin has announced a plan to have 80-percent sustainable content in its new tires.

Company officials announced at the Movin’On advanced mobility conference that Michelin  will also strive to have 100 percent of tires recycled by 2048, said Cyrille Roget, Michelin technical and innovation communications director. Roget made the announcement at the Montreal conference along with Nicolas Beaumont, Michelin senior vice president—sustainable development and mobility.

The tire industry already starts from a high recycling rate, according to Roget. “Today, 70 percent of all tires are recycled,” he said. “By comparison, only 40 percent of plastics are recycled.” Fifty percent of recycled tires go to high-value-added products such as rubberized asphalt and shoe soles, Roget said. Michelin tires, according to the company, currently contain 28 percent sustainable material, including 26 percent bio-sourced and 2 percent recycled materials. But reaching a 100-percent recycling rate and 80-percent recycled content for tires is crucial to Michelin’s long-range sustainability plans, he said.

“There are two ambitions here—to change what tires become, and to change what they are made of,” he said. “The savings would be huge,” Roget said. “If we achieve these ambitions, we would save 33 million barrels of oil each year. That is equivalent to the entire annual oil consumption of France.” Michelin has many collaborators in its program to achieve its 80-percent goal and overall sustainability plan, and hopes to find more, according to Roget.

“We seek the involvement not only of tire manufacturers, but of tire recyclers,” he said. “This is not something we can do alone.” Michelin began its Biobutterfly program to find sustainable materials in 2012, according to the company. It is working with the biomaterial research companies Axens and IFP Energies Nouvelles to create synthetic elastomers such biomass such as wood, straw, or beet, the tire maker said. Lehigh Technologies Inc. will also play a major role in achieving Michelin’s 80-percent goal, according to Michelin.

Tucker, Ga.-based Lehigh, which Michelin acquired in October 2017, manufactures micronized rubber powders (MRP) from recycled rubber. MRP replaces oil- and rubber-based feedstocks in a wide variety of industrial and consumer applications, according to Michelin. These include high-performance tires, rubberized asphalt, plastics, coatings, sealants, consumer goods and construction materials, the tire maker said. “We’re thrilled to be part of Michelin,” said Lehigh CEO Alan Barton in an interview at Movin’On. Michelin’s goal is to have the tire industry adapt MRP as a standard product, according to Barton.

“We’re part of a new business unit at Michelin, High Technology Materials, and we fit right into the mission of that business,” he said. The cycle times for developing new tires are long, so the Michelin acquisition hasn’t yet had much impact on Lehigh’s growth, according to Barton. “But we’re getting a lot of positive feedback,” he said. “We now have the flexibility to do what we need to do, and a great partner that is part of a well-known brand and is willing to help us do the R&D that will make it happen.” One of the greatest positives of the Michelin acquisition is Lehigh’s new production facility in Murillo del Fruto, Spain, which will begin production this summer with an annual capacity of 10,000 tons of MRP, according to Barton. This will be on top of the 60,000 tons of MRP produced annually in Tucker, Barton said.