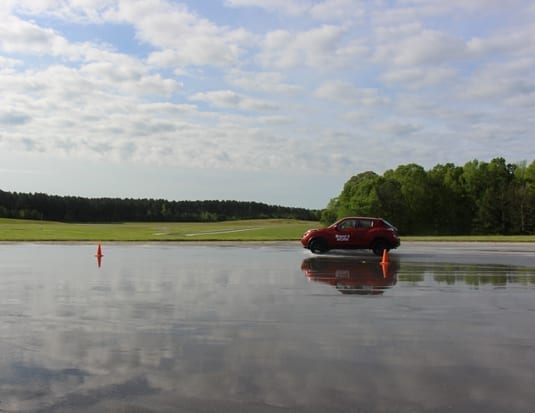 Automotive journalists and Web influencers were invited to the Michelin Laurens Proving Grounds located in South Carolina last April, for a series of tests aimed at building awareness as to the inherent dangers of driving vehicles equipped with worn tires.

By inviting participants to draw their own conclusions as to the performance of new and used tires of two competing brands, Michelin’s main objective was to highlight a reality deemed essential to driver safety, in addition to a secondary objective related to sustainable development. This public service message should hopefully lead to the implementation of a new level of transparency throughout the tire industry as to the performance of products throughout their lifecycle.

“As the various tire brands differ greatly when new, they also differ greatly when worn, and they all wear down at varying rates,” points-out Eric Bruner, Director, External Communications at Michelin North America. “Some tires are safer when worn by 2/32 of an inch than similar competitive offerings when new!”

Track A9 of Michelin’s vast on-vehicle test site for North America, which is set up to simulate the conditions of a typical rainy day, allowed journalists to experience wet braking performance of tires from two competing brands worn down by 3/32 of an inch after having experienced their performance when new.

“In most instances, tests are performed solely with new tires. Consumers purchasing these tires don’t have access to information regarding their performance when they reach the midway point of their lifecycle” explains Eric Bruner.

According to Mr. Bruner, drivers need this information to make informed decisions adapted to their needs and lifestyle to help them avoid the premature disposal of perfectly good tires. “This is why we are suggesting that you initiate this dialogue. Consumers should be in the know as to the performance of tires throughout their lifecycle,” he insists.

“At Michelin, we believe that safety should always be front and centre,” affirms Michelin Technical Communications and Product Marketing Director, Tom Carter. “Tires should perform as designed throughout their complete lifecycle.”

“Numerous tire manufacturers sacrifice the number of biting edges of tires in the service of other performance characteristics, which they highlight when marketing their products,” he adds. “These tires tend to wear down quickly, thus compromising safety from a lack of grip and adhesion.”

On the other side of the coin, industry professionals and other experts have quantified the number and cost of safe tires prematurely removed from circulation by ill-informed consumers annually; $ 25 billion, as approximately 450 million perfectly good tires are trashed, which is the equivalent of six months of CO2 emissions produced by the City of New York.

“Rarely do we get the chance to compare new tires against examples of worn ones in a matter of minutes. You will be experiencing between 3 to 4 years of wear in a few minutes on a wet road surface,” explained driving instructors to participants, who immediately headed to the test track, which was artificially wetted to simulate conditions equivalent to 1 mm of rain.

After having completed a first round of comparative handling tire tests, journalists were submitted to an objective test by performing ABS system wet-braking tests at a speed of 72.5 km/h. Participants were able to measure the braking distances of new and worn tires of both competing brands. Results: even with 3/32 of an inch of wear, Brand A outperformed new Brand B tires.

“We hope that by sending a clear message, word-of-mouth will take hold and spread this important news,” exclaimed Eric Bruner. “We hope that the driving public will gain awareness as to the stakes involved. If consumers insist on having information regarding worn-tire performance, automotive manufacturers will make it mandatory, which in turn will force tire makers to adapt to this new reality when engineering new products.”