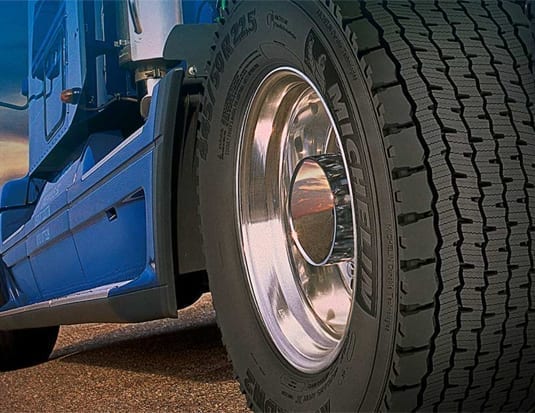 Michelin North America (Canada) has announced that it recognizes the leadership of the Alberta Ministry of Transportation and the Alberta Motor Transport Association (AMTA), which have worked together to enact regulations that allow wide-based single tires to travel on provincial highways.

The wide-base single tires, says Michelin, are manufactured using 25% less raw materials than a traditional dual-tire configuration, resulting in fuel efficiency throughout the entire lifecycle, and with less material to be processed at end-of-life.

Moreover, the total payload increase, from 7,700 kg for a single axle to 9,100 kg, translates into an increase in hauling and payload capacity, along with a decrease in fuel consumption and green-house gas emissions.

“As a promoter of sustainable mobility, Michelin is encouraged when provinces work collaboratively with their commercial stakeholders to develop pragmatic solutions that help the country transition to a lower-carbon economy,” said Jeff MacLean, president, Michelin North America (Canada). “Regulatory harmonization across Canada that enables the adoption of wide-based single tires also  helps facilitate the movement of goods, and increases productivity and competitiveness for Canadian carriers.”