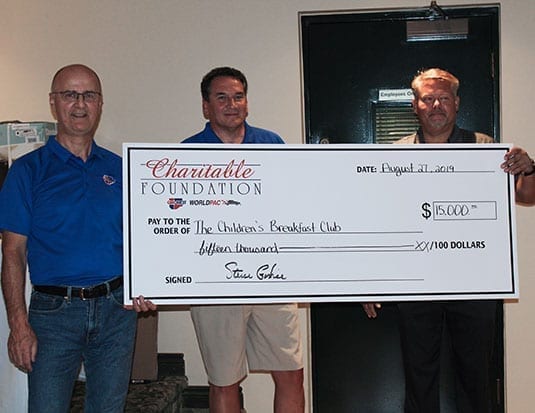 Then the rain started and that deterred a few of the golfers… but 139 diehards teed off and hoped for a good day as this event was to the benefit of The Children’s Breakfast Club! This organization provides food in order to feed children who go to school hungry. In fact through the schools, one sector of ‘The Club’ feeds 5,000 children a week! And this organization has no help from government but is totally supported by organizations like CARQUEST and WORLDPAC.

Out of the course, everyone plays the first hole… and are invited to ‘Beat the Boss’ there! Steve Gushie, President, CARQUEST Ontario would hit the ball as far as he could and then everyone on the foursome would take one shot to try to drive farther than he did. And to make it more interesting, there’s a fair sized pond surrounded by reeds right in front of the hole!! No one won a prize… just a chance to Beat the Boss!

The rain did not stop and finally the event was called with everyone getting in at least nine holes. Dinner was served and then came the cheque presentation. Bill Strong, a CARQUEST employee and a dedicated volunteer with The Children’s Breakfast Club told those in the room what the Club stood for and some of the other work it does for unfortunate kids. Then it was time for the cheque to be shown with the amazing total of $15,000 for The Children’s Breakfast Club. It was presented by Steve Gushie, Jason Yurchak, V.P. WORLDPAC Canada and Bill Strong.

Well done all and I know the children will appreciate the ‘food’ you supply!