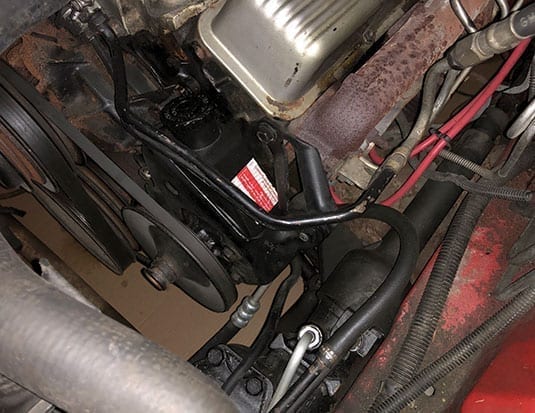 Prior to the early 1950s, power steering wasn’t offered on most passenger vehicles.

It all changed when Chrysler introduced power steering on the 1951 Imperial as a regular option.

If you’ve never driven an older vehicle, it can be hard to understand the benefits that power steering offers, such as ease of turning. And although we’ve seen an increase in electric power steering systems in the last decade, many of the vehicles coming into your shop still use hydraulic fluid to operate the power steering. When it fails, it can be a big problem.

When technicians hear a whining or screeching every time the wheel is turned, chances are there’s a problem with the system. Like suspension parts, a vehicle’s steering system puts up with a lot of abuse over time—keep in mind how often it turns while driving—as well as heat, not to mention punishment from vibration and shocks transmitted up from the road surface.

When you look at the major components of power steering systems—the power steering pump, the steering rack and also pinion shaft can be expensive to replace if worn or damaged. These repairs can often be avoided (and wear much reduced), as long as simple and regular checks are performed as part of a preventive maintenance strategy.

Examining the power steering system in more detail, we can see that it is a closed system but the fluid that lubricates it can become contaminated. This happens either through leaks that allow air and dirt into the system, or deterioration of the moving parts, including metal shavings, as well as rubber particles from the hose and pump. As the fluid becomes more contaminated, it causes greater heat and friction between the moving parts of the system and will eventually lead to component failure.

Like most fluids in modern vehicles, power steering systems have a fluid reservoir that is often clear enough to check the level of the fluid. Unscrewing the cap can also allow the technician to check the colour and consistency of the fluid, to determine whether it needs to be flushed or not.

The best part about a power steering fluid flush is that it is perhaps one of the most straightforward jobs for technicians to perform and one of the least costly for motorists. Yet it is frequently overlooked by both shops and their end customers. As a result, the repercussions can be severe, with power steering component failure resulting in a hefty bill for your customers.

For repair shops and technicians, a good strategy is to educate customers on the benefits of preventive maintenance and create a regular vehicle inspection as part of every oil change, including the inspection of the power steering system.

Besides costing much less for the motorist overall, it can help the shop gain long term business by creating a level of transparency and trust.

Having good advice, knowledge and sound business practices is a win-win for both parties. Imagine the alternative—a small leak in the power steering system causes the pump to fail, resulting in a repair bill of $500 or more. The small leak could have easily been detected but was ignored because a multi-point inspection wasn’t included as part of the oil change, or the motorist wasn’t informed about the importance of changing the power steering fluid.

Both shop staff and customers should never be afraid to ask questions, especially when it comes to fluids. Doing so is far more cost effective than having to deal with expensive, labour intensive repairs.